Newsletter
Sign Up today for our FREE Newsletter and get the latest articles and news delivered right to your inbox.
Home » 1963 Chevrolet Impala – El Six 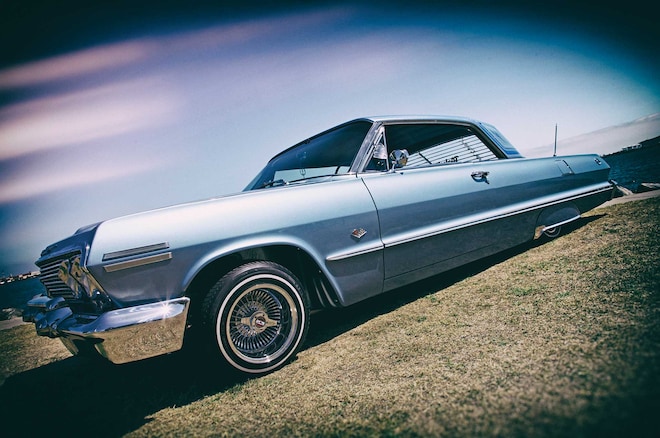 Jose Reynoso of National City, California, decided to build a lowrider to keep his kid busy and focused on something positive. His search for a project car began in 2011. He was looking for a 1963 or 1964 Impala; he even traveled up to Los Angeles a few times to find one with no luck. “I got a call from my friend Andres Morales; he had found a ’63 Impala on Craigslist. After getting more information on the car, we found out my cousin Jose Coronado owned it. It was a solid project and I got it for $3,000.”

Jose began the three-year project by taking the body off the frame. “Miguel Aguirre would come over to help me work on my car and many times we stayed up until 3 or 4 in the morning to try and finish it for one car show or another.” When the car was finally ready for paint, Jose went with Mike D at Davey’s Auto Body. “It was then that Mike D wanted me to go check out his car club, the Majestics. At the time, I wasn’t planning on joining a club. All I wanted was to build a clean and simple car to cruise in. After hanging out with the Majestics and getting to know them, I liked the unity within the members. They were family oriented and always helped each other.” Jose decided to prospect for the club and a year later he was voted in as a member.

Soon after, his niece Joanna Coronado asked me to be her “padrino de honor” at her quincenera. The day of her quincenera was when he brought out his Impala named “El Six 3” for the first time. “Since then, I’ve been cruising it all over San Diego and Tijuana.”

Jose would like to thank Miguel Aguirre for all his help on building the car from bumper to bumper. Mike D for the paintjob, Meza Paints for sponsoring the paint, and all the support from his fellow Majestics members. Special thanks to his wife Alejandra for her patience and support as well as his son Jose Angel for always helping him get the car ready and cleaned for the shows.

1963 was indeed a tumultuous time in the country’s history. Beatlemania, Martin Luther King Jr.’s “I Have a Dream” speech, and JFK’s assassination were just some of the things going on. Chevrolet’s Impala was now in its third generation and was offered with four engine choices ranging from the 230ci inline six to the 283, 327, and 409 V-8s. A very rare Z11 427 V-8 was offered as well, just enough to qualify as a production engine for NASCAR competition. It is highly sought after by collectors. Approximately 832,000 Impalas were built, with around 153,000 of those featuring the SS option. The SS upgrade cost $161 dollars at the time and interior features included all vinyl front bucket seats, an SS steering wheel hub, swirl pattern inserts on the dashboard, and (on Powerglide- and four-speed-equipped cars) a center console that had a locking storage compartment. A ’63 Impala SS convertible would’ve run you about $3,185 at the time and was Chevy’s most expensive full-size offering that year.