Newsletter
Sign Up today for our FREE Newsletter and get the latest articles and news delivered right to your inbox.
Home » 1962 Chevrolet Impala Convertible – Never Quit 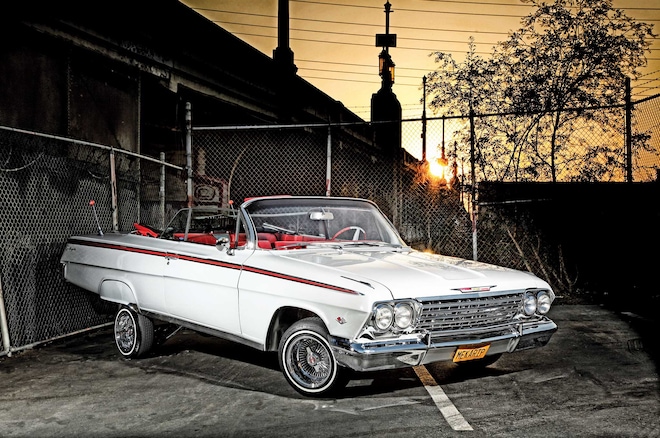 In 2007 we featured a ’62 Impala hardtop with blue trim belonging to Herman “Pooh” Ashley of Los Angeles. It was built in honor of, and named after, his sister Shameka who lost her life, but if that wasn’t enough, the car was wrecked a year later and practically unsalvageable…well, almost. Many might have given up after suffering that much loss, but Pooh ain’t your average guy. He got word of a ’62 rag shell — no frame, no doors, just quarter panels, floor, and windshield. So he started borrowing what parts he could save from the hardtop and transplanting them onto what would eventually become known as “Shameka’s Revenge.”

Pooh wanted a car that’d hop and this time chose red accent colors to make it look different from his first car. It features a full frame reinforcement, chrome undercarriage, chrome 9-inch Ford rear that came out of a ’78 Lincoln Versailles with front suspension chromed and molded. Ten batteries power two chrome pumps with two Adex square dumps in back and one in front keep the juice pumping. Six-inch cylinders in front with 12 inchers in the back keep the 13-inch Zeniths jumping and rolling. Mikey from Hop Shop in Gardena, California, took care of the suspension duties. The engine is a 5.7L LT1 and tied to a 700-R trans, which propels the ’62 down the road with plenty of power.

Body mods include reinforcements to the quarters, firewall, and doorjambs to make it a hopper done by Dave Little at Little Customs in Palmdale, California, who also painted the car the white/red combo. An Alpine deck and equalizer, two Hifonic amps, with Pioneer 6x9s and Kicker subwoofers, also done by Mikey from Hop Shop keep the tunes thumping loudly. Interior appointments include a Dakota Digital dash with red upholstery done by Ultimate Hydraulics in Norco California.

Believe it or not, Pooh has already sold the Impala and is working on a ’56 Bel Air, but still gives thanks to Mikey, Fuzz, Dave Little, V-Max, Switchman, and to his wife and family for their ongoing support. We look forward to seeing the completed Bel Air rolling strong.