Newsletter
Sign Up today for our FREE Newsletter and get the latest articles and news delivered right to your inbox.
Home » 1959 Chevrolet Impala – Pinky’s ’59 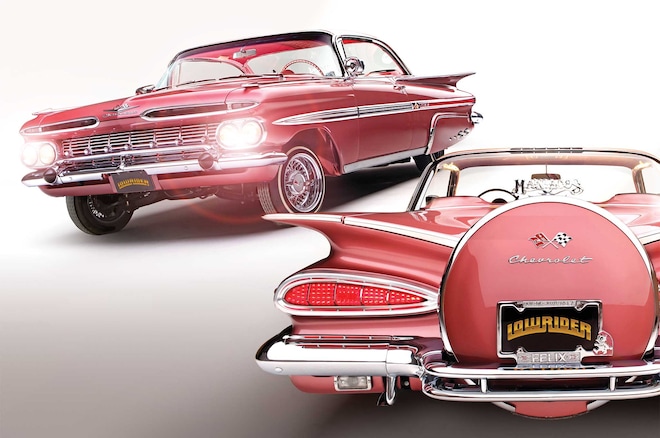 Jose “Pinky” Serna’s search for a 1959 Impala ended when he got a call from his friend Bigg Slice who had a complete ’59 that needed a full restoration. After negotiating a good price, he was able to bring the ’59 home. “I’ve always loved the fins on these cars,” explained Pinky. His friend Bigg Slice also hooked up Pinky with Louie and Mike at Classic Garage in Rialto, California.

Classic Garage did a full frame restoration on the ’59. They used a salmon House of Kolor paint and also installed a 327 engine with a 700-R transmission. Pinky built the five-nine to be a cruiser, so when the 327 started giving carburetor problems, he decided to look for an alternative. He spoke to VMax who told him about the reliable LS motors and took the ’59 to VMax Restorations in Norco, California, where VMax and his crew swapped out the 327 for a 2009 LS3. Pinky decided to have LS engines on all his cars after seeing how much more reliable they are.

“I built the car so that I can have it at church for our wedding.” His wedding date was set for July 4, 2015 and he still needed a few things to do. He kept looking for aftermarket accessories at the swap meets and online. He obtained the LED taillights from The Car Shop in Orange, California, while Victor of Best Polishing in Pomona, California, chromed everything. The final stop before the completion was to California Upholstery in Bell, California, where Joe and crew installed the pink vinyl, leather, and suede. They also installed Alpine deck and all Focal sound system. The ’59 was sitting outside the church during his big day and now he can cruise to all the shows with no worries.

Pinky would like to give a special thanks to his wife Patty, family, and his Maniacos Car Club members. Also thanks to Junior, Louie, Mike and VMax for their help in building the car in a short time period.

The ’50s were coming to a close, and many things were rapidly changing. Rock and roll suffered a heavy blow when Ritchie Valens, The Big Bopper, and Buddy Holly perished in what became known as “The Day the Music Died.” Cuba became and communist country, and Alaska and Hawaii officially became the 49th and 50th state. It was also a year of change at Chevrolet with some unique design touches. The introduction of the bubbletop rear window was also paralleled by the one-year-only cat-eye taillights. The El Camino was also unveiled, only to be discontinued after the 1960 model and reintroduced in 1964. The Impala also totally redesigned and became a separate series, adding two sedan variations to their offerings. Powerplants remained the same with the 235 six cylinder, and 283 and 348 V-8s. The longer horizontal gauge cluster of ’58 got another facelift with the round gauge cluster similar to that seen in ’57. Even if you weren’t a fan of the ’59 Impala in its entirety, with a total production of about 407,000 total being built, the steering wheel is now a prized commodity among customizers.

Jose Serna owns a tow truck company called Pinky’s Tow in El Monte, California. He has been a member of Maniacos for 15 years and is married with kids. He’s currently finishing up a 1963 Impala convertible with an LS motor and has all Impala convertibles from 1958 though 1964. He finished this 1959 Impala in time for his wedding day.