Newsletter
Sign Up today for our FREE Newsletter and get the latest articles and news delivered right to your inbox.
Home » 1959 Chevrolet Impala Convertible – The Antidote 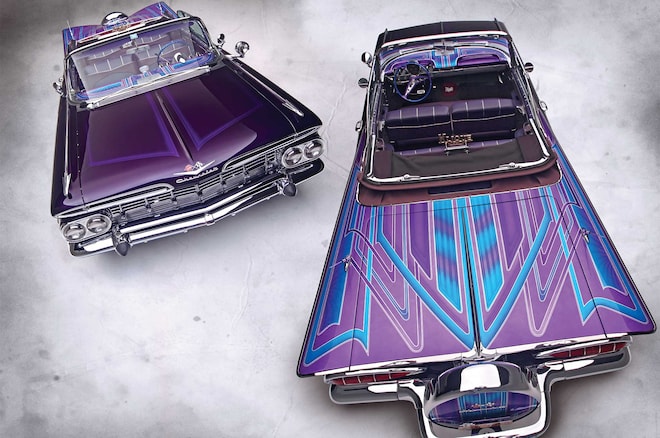 We often lose sight of how good we have it. Going to car shows, spending time with family, having a healthy and stable life. Those opportunities come at the behest of people in our armed forces putting themselves in harm’s way so we can enjoy those things. The soldiers out earning their checks by defending our freedom don’t ever seem to get the credit they deserve, and when tragedy strikes, it can probably feel like the most thankless job in the world.

While Miguel Alatorre was deployed in Afghanistan, he was injured when multiple IEDs struck his gun-truck. He was lucky to be alive, and although injured, Miguel stayed in the fight. When he was eventually given a medical discharge, the emotional scars compounded the physical ones and the transition back to civilian life was not easy. Miguel had previously built a ’64 Impala after his first tour to help him cope with the stress he’d been through and thought it’d be therapeutic to take on another project. He set out to find his dream car — a ’59 Chevy Impala convertible.

Miguel found this one online and showed his friend, Miguel Aguirre, who told him that he in fact had built a model of this car as a kid and it was what got him into lowriding. The car previously traveled under the name “Poison” until it disappeared from the show scene. The car was running, but the interior was missing and the purple paint was old and faded. Miguel decided to keep the car true to its history, but add some touches that he felt reflected his personality. The new name it was given, “The Antidote,” seemed like not only a befitting title for its second go-around as a show car, but the build truly became the remedy that the Purple Heart-decorated owner was looking for to stay focused on something positive.

For suspension, Miguel kept much of it the same, but the wrapped frame was powdercoated to offset a lot of the chrome. A shock tower bridge on the frame was added for more support, along with reinforced stress points. A custom ’58 Impala wishbone and Lincoln Versailles rearend were also added with stainless tubing all around. Molded control arms with ’70 Impala spindles and brakes are connected to a CPP master cylinder and booster. The ’85 Chevy 350 and TH350 the car came with were dressed up a bit with an MSD HEI ignition, Griffin radiator, Hooker headers, and a K&N air cleaner. A two-piece driveshaft with slip yokes was also added. Work was done by Miguel Aguirre.

Four batteries power two Pro Hopper pumps, three LA square dumps, and four switches for the 6-inch front and 8-inch rear cylinders all running through stainless hardlines. It was installed by Carrot’s Hydraulics in San Diego. Rolling on 72-spoke cross-laced Zeniths with Premium Sportway 5.20s, it’s looking as old school as ever. Miguel wanted to keep with the original purple theme, but have it redone and patterned out to liven it up a bit. Robert Ceniceros and Sal Manzano at Riviera Brothers in Chula Vista, California, shot the car in House of Kolor Deep Candy Purple and did the amazing patterning. The convertible top was redone in Stayfast plum purple with the “gangsta” back window and a chrome-plated rack. The interior was done up similar to the original ’59 pattern and adorned with custom purple carpet, seat covers, and door panels by Klique Customs in San Diego. Dakota Digital gauges light up the dash, while a Kenwood head unit, Rockford Fosgate amps, Beyma speakers, and a Rockford Fosgate subwoofer keep the tunes rolling in. Work was done by Ronnie’s Electronics in National City, California. The car was finished in 10 months and debuted at the Klique 50th anniversary party and couldn’t have been more well received. Miguel thinks there’s still more to do on the car, but believes it’s been about as close to a cure as possible to be able to channel all this thoughts into this effort. Thanks goes to his wife Bonnie, sons Joshua , Jacob, and daughter Crystal, as well as Robert Ceniceros, Miguel Aguirre, Sal Manzano, Oscar Pelayo, Zach Tackett, and Israel Serrano. “Lowriding has changed my life and this car is dedicated to soldiers who serve. I finally get to make up for lost time with my family by going cruising and that’s when I’m most relaxed. It’s been a blessing working on this car to help me get through what I’m going through.” Well said, Miguel. Thank you for defending our freedom. You truly deserve this.