Newsletter
Sign Up today for our FREE Newsletter and get the latest articles and news delivered right to your inbox.
Home » 1959 Chevrolet Bel Air – The Perfect Couple 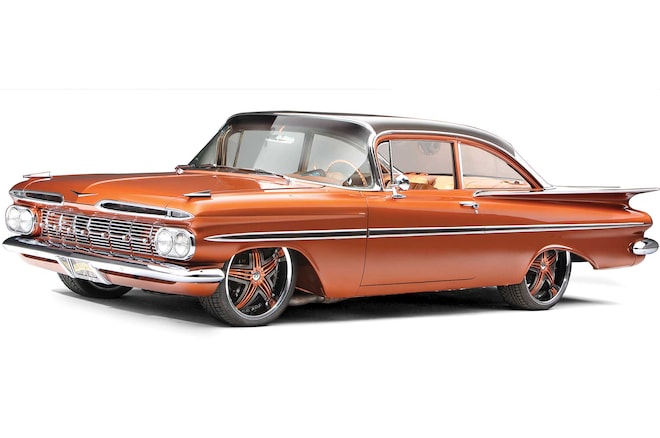 Luis Lemus of House of Pain Customs in Baldwin Park, California, has built some awesome cars that have graced the pages of LOWRIDER Magazine. When he met the woman who’d eventually become his wife, Cindy, he discovered that, being in the business as well, they both shared a passion for cars. He also found out that she liked ’59 Chevys, and he happened to have one in storage he’d been sitting on to build as a project eventually. Since Cindy was no greenhorn, he had his work cut out for him trying to build something unique that’d suit her particular tastes.

In the beginning, she was in on the build, providing input to what she’d like to see that had sort of a resto-mod feel to it. His plan was to surprise her with the finished product, although that didn’t quite work out as planned…more on that later. So what do you do to make a ’59 Bel Air stand out? The car came from the factory looking pretty cool, but that doesn’t mean there weren’t touches that could really take it a step further.

The frame was fully powdercoated and given 2-inch drop spindles up front with Mcgaughys tubular suspension in front and Hotchkis tubular suspension components in the rear. A 605 steering box was also added along with power disc brakes from ABS in front and the stock rear housing is stuffed with 3.85 Posi gears. A set of Diablo wheels wrapped in Continental low-profile rubber give it the rake Cindy was after.

The powerplant is quite a sight to behold, a 409 that came out of a ’62 SS from Luis’ friend David Leon, and dressed up with roller rockers, a more aggressive cam, and dual Edelbrock four-barrels. A 350 trans with a shift kit provides the rest of the goodies for the drivetrain. A US Radiator and Kinetik battery bring everything to life and keep it cool, while a Flowmaster exhaust spits out the spent fumes.

The interior features ’62 SS buckets and the rear seat as cut in half to achieve a similar effect and was given a ’59 Chevy station wagon armrest. The center console was custom made and given an aftermarket front armrest. The two-tone leather by Alonso’s Upholstery looks as comfortable in the photos as it is in real life to sit in. The interior was completely covered in Dynamat underneath to keep the noise down, but we’re sure that listening to the tunes of the Pioneer stereo provided by John Jarasa and having the Dakota Digital gauges light up the cab tops it off perfectly. The Lokar pedals keep all the stop and go working like a dream.

On the outside, Cindy helped pick out the colors that set it off. The car came with rare California bumpers and factory paint dividers. Paint work was done with Axalta waterbase paint and LE 8700 clear by Luis and bodywork done by Jesus Coronel. The finished product is quite a beauty.

An unexpected late-night visit to the shop by Luis’ wife spoiled the car planned for a marriage proposal, but that’s the way it goes sometimes. Although not fully complete, the car nearing it’s final unveiling brought tears to Cindy’s eyes. “I would like to thank my hubby, Luis, for putting up with my criticisms and making my dream car a reality,” Cindy says. Special thanks for making Cindy’s car the show stopper that it is go to Angel Sierra, Saul at Wild Child Customs, Jesus Coronel, Augie at Auto Glass Tech, Premiere Polishing, and Woody’s Chrome. Oh, and to James for making Luis repaint the car, now known as Ginger, who was Sharon Stone’s character in the movie Casino. Bad ass girl, so hence the name for a bad ass car. This happy couple can both cruise in style now.

Cindy Lemus has been an auto estimator for over 20 years. She grew up around lowriders, as her brother and uncles were painters. Raised in LA, she spent a lot of time cruising Whittier and Elysian Park when she was about 6. This ’59 Bel Air is her first low-rodder.