Newsletter
Sign Up today for our FREE Newsletter and get the latest articles and news delivered right to your inbox.
Home » 1958 Chevrolet Impala – Highway to Heaven 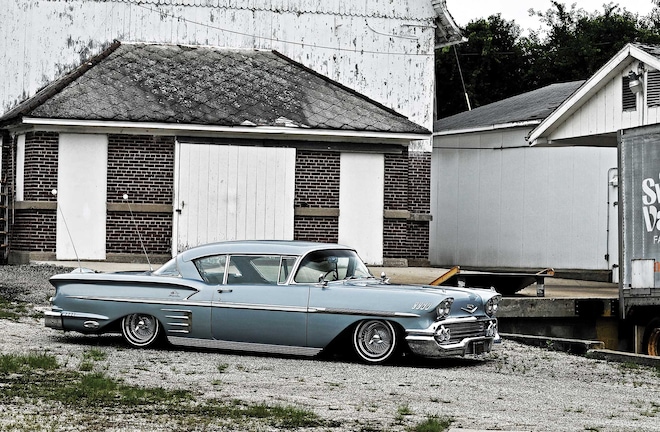 There is a very special bond between a mother and her son. Although the phrase “momma’s boy” is used disparagingly, it’s meant with affection and any man would be proud sharing that kind of relationship. For 39-year-old Jason Kilvinger of Waukesha, Wisconsin, he had that close bond with his mother Judy. A very strong woman, she owned a travel agency and often took a young Jason on exclusive golfing trips with her. She instilled a level of hard work and passion that was required to maintain a business, a home, and beautiful cars. It was there that Jason got that urge to have nice things. As Jason got older Judy became one of his biggest supporters as he became a successful businessman and purchased his own pharmacy, elevating his dreams.

One thing always prevalent in Jason’s life was the lowrider culture, having owned multiple custom cars and being a longtime member of USO Car Club. For many, the Mecca of the lowrider enthusiast is the 1958 Chevy Impala. As the hardworking successful businessman Jason had become, he was eventually able to make the ’58 a reality. Jason found a 1958 hardtop in Kentucky and called a fellow USO member to give it the once over. He was able to purchase the elusive icon and had it brought to his home in Wisconsin. To make sure the new Chevy was properly worked on, Jason had a custom car lift built into his detached garage to make sure custom additions would be done to his standards.

The first step was elevating the Impala with better chrome. The motor was given the chrome treatment to show off the beautiful 348 tri-power V-8. Jason got on the phone and ordered a set of Dayton wire wheels to enhance the custom look of his ’58. Inside his custom-made garage, Jason and USO member Bert Eichler installed a full chrome undercarriage to the Chevy. The next step was giving the Impala a suspension adjustment. A full air-ride suspension was installed, bringing the ’58 to the ground at the touch of a switch.

Throughout the build, Jason’s mother Judy, along with supporting everything he was doing to the ’58, was battling with something much more serious. She had been diagnosed with a massive brain aneurysm and after an emergency surgery, she passed peacefully in her own house with Jason right next to her. With all that she had taught him throughout the years, Jason had absorbed it and became a better person for her guidance and help. “I know she’s looking down and she’s proud of my success,” Jason tells Lowrider Magazine. “I know we will be next to each other again, Heaven Aw8ts.”