Newsletter
Sign Up today for our FREE Newsletter and get the latest articles and news delivered right to your inbox.
Home » 1951 Chevrolet 3100 – Old Pickup New Heart 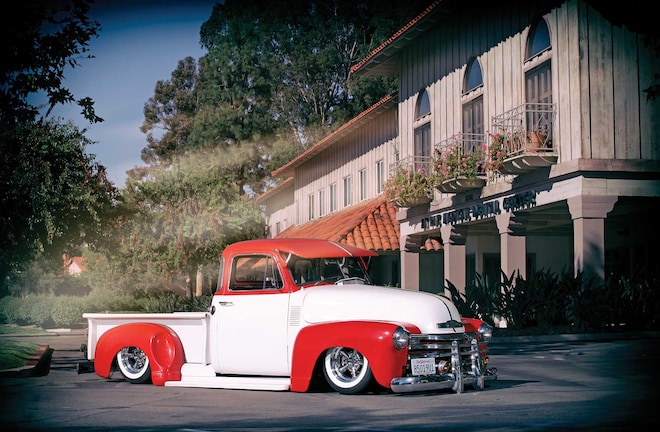 Victor Carral of Mission Viejo, California, purchased this 1951 Chevy from an old girlfriend’s father. “Her dad Fransesco had a small collection of old cars that included a 1947 Fleetline, 1937 Packard, and a few more. “I asked her if I could buy one and, if so, I’d build it to drive her around on weekends like her father did when she was younger, looking for parts at swap meets.”

After a year, he was able to buy one and bring it down from Oklahoma. The truck was originally from San Diego. His girlfriend’s father bought it as a shell. After collecting the missing pieces he put the truck together. He then painted it white and red in his backyard.

When Victor got it, he wasn’t sure what direction to go with it. “It needed a new engine block and a few other things. One day, my old man wanted to see if it would turn on, so my buddy and I managed to get it running with some carb cleaner, a lot of gas, a new battery, and some hope.” Victor decided to take it for a spin and the roar of the glass pipes through the hills got him excited. Before he could celebrate he saw all the coolant shooting out of a crack in the engine block.

Victor then talked with his friend Marlon about slamming the truck and getting a new 350 for it. “He told me that I was going in the wrong direction with it and that he knew someone who did unbelievable work.” That someone was Chassis by Aaron Iha of Covina, California.

The first day Victor met with Aaron, they discussed his expectations on the build. “I told him that I wanted to drive it everywhere and not worry about ending up on the side of the road and that I had intentions of driving it to work everyday.” Before he left, Victor had purchased the LSX 5.3 and 6L80 transmission from him and Aaron began on the build. Aaron manufactured the frame to fit his truck, allowing it to sit on the floor and to be able to mount the LS engine.

“I’d like to thank my parents for always letting me run with my dreams no matter what they may be. Marlon for his help and making time to hear my ideas, my little brother Ivan for always lending me a hand, and to Lydia and Francesco for starting it all.”

Engine
2011 LSX 5.3 with a 6L80 transmission, aluminum radiator, and K&N Filter. The MagnaFlow exhaust was custom made so that the truck may lay on the floor.