Newsletter
Sign Up today for our FREE Newsletter and get the latest articles and news delivered right to your inbox.
Home » 1950 Chevrolet Styleline – Keeping it in the Family 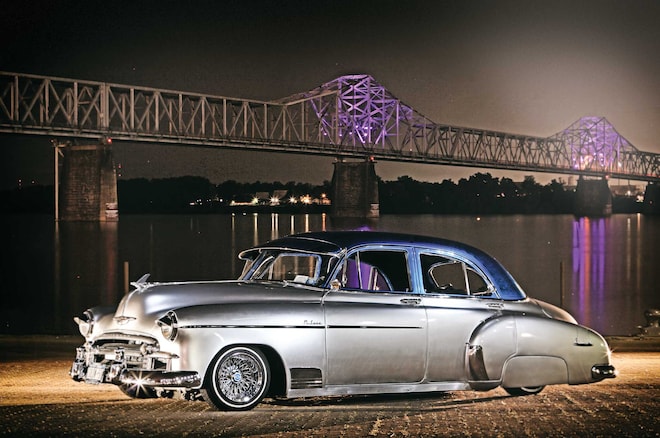 Hector “Manny” Rodriguez grew up in the Bronx. As a teenager, he began building lowrider bicycles. At the time, one of his uncles owned a Cadillac with hydraulics. This ’50 Chevrolet DeLuxe belonged to his dad who purchased it in New Jersey from the original owner. “It was an original numbers-matching car,” Manny says. “My dad is a real car guy and he always kept me in the garage helping him out and teaching me about Chevys. He used that to keep me from running around in the streets and getting into trouble. I’m a car guy because of him.” His dad had the ’50 for several years before he had to sell it. “I didn’t want the car to leave the family, so I bought it off of him.”

Manny cruised the Bronx in an all-OG DeLuxe. In less than a year’s time, he began to get bored of the car and felt that he needed to add his own style to it. Manny slapped some 13-inch wire wheels and installed a sound system. “Right away my dad told me that he knew where this was headed and he didn’t like it, and I told him that I was sorry but that I needed to customize it.”

Even though he might not fully agree with his son, he helped him build it. Manny’s childhood friend Paul Pinto from New York also had a huge part in helping him build it. “We practically built it in Paul’s house.” When it came time to paint it, he reached out to his longtime friend Alex Luna from Providence, Rhode Island. “He told me to bring the car and he would help me paint it.” Four weekends in a row, Manny traveled to Alex’s were they painted the car together. After paint, Manny installed the hydraulic system himself. “I ended up redoing the setup three different times, and every time I ordered components and fittings from Mike Vitally at Black Widow Hydraulics in Detroit, Michigan.

Before this ’50 Chevy, Manny has owned multiple lowriders but he sent them all out to get built. This is the first car that Manny actually built. “I’d really like to thank Paul Pinto; he has helped me more than some of my own family members.”