Newsletter
Sign Up today for our FREE Newsletter and get the latest articles and news delivered right to your inbox.
Home » 1949 Chevy 3100 Stake Bed – Stake Your Claim 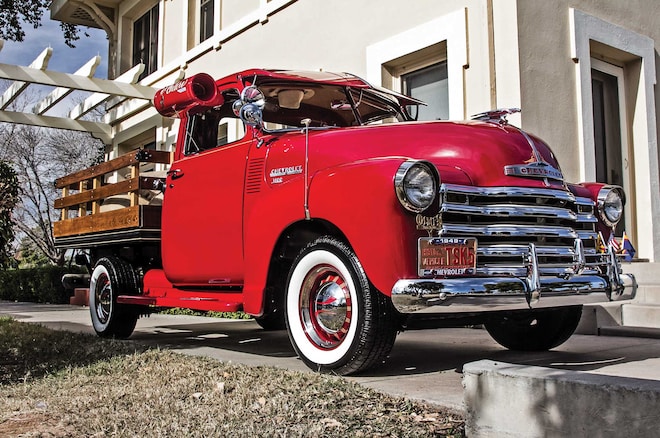 Most of us know that building a lowrider takes time and patience. Just ask Ray Martinez, whose restoration journey lasted over 28 years. Shortly after purchasing this 1949 Chevy 3100 stake bed 1/2-ton truck from its second owner, “El Chilero,” as it would come be known, began its transformation from an average everyday work “trokita” to a full-on award-winning masterpiece.

After several paintjobs, none of which met Oldies Car Club’s high standards, Ray’s father, Ray “Bolitas” Martinez Sr. said, “It’s time for a full restoration to build this one up real nice.” So with his father as the inspiration and driving force behind this build, Ray called upon some of Arizona’s top car builders.

The project began with Steve “The Master” Young spraying the unique blend of Fire Engine Red two-stage PPG paint found throughout the truck with Tony’s Pinstriping adding his signature lines. While Angel Viloria of Angel’s Upholstery covered the original seat frame with custom camel-colored leather and red embroidery accents, Adam “The Wizard” Shaw in Casa Grande, Arizona, was rebuilding a 1954 Chevy 235 bored out with an original dual-carb intake manifold and a Fenton split manifold exhaust.

With the project in full swing, Ray would complete this build by tracking down some hard-to-find NOS accessories, which are a must in any vintage restoration. Some of these rare items include dual “unity” spot lights, a Screaming Eagle hood ornament, dual marble reflectors, thermador cooler, and an original butterfly steering wheel.

“I would like to thank everyone that was involved with this project, especially all the members of Oldies C.C. Phoenix chapter, my brother Mario, and to the most patient person I know, my beautiful wife Marcia Bravo-Martinez,” says Ray. Sadly, Ray’s father passed away before this build was completed, but we assure you your “Jefito” would have been proud of the final result.