Newsletter
Sign Up today for our FREE Newsletter and get the latest articles and news delivered right to your inbox.
Home » 1949 Chevrolet Pickup – Laid to Rest 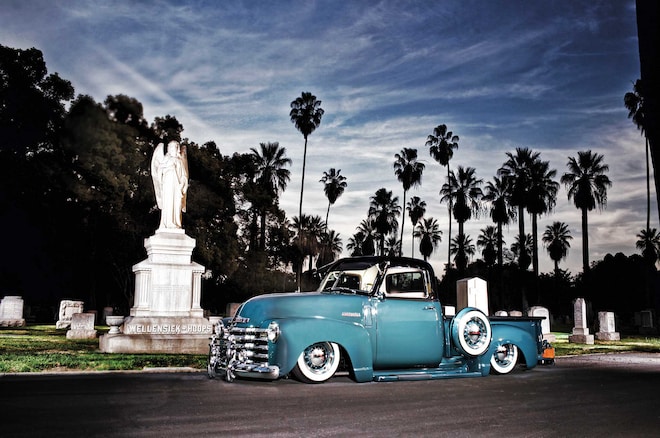 Alex Rodriguez’s grandmother used to own a bakery in East L.A. A nearby college held regular car shows and he and his brother would always go and check out what showed up. That’s when they began to also talk about fixing up their own rides one day.

Alex began working at an automotive production shop when he was 16, called In and Out in Los Angeles…no not the fast food place. He began by detailing the cars, but he was eager to learn more so he would hang out at the shop after work and would go in on the weekends just so he could learn from how it worked. “I didn’t go school, I learned everything there.” Alex then went though some difficult times that included losing his brother. Over a decade had passed before he began working on cars again.

“I got a job at a body shop, but everything had changed. From the way of doing things to the types of products used. I had to reteach myself the new techniques and use the new products.” Luckily for him, it didn’t take him long to pick everything up again.

He bought this truck from a friend in Sacramento, California, who got the truck as payment for some electrical work that he did and offered it to Alex for $1,600. Alex and his friend Joe Gutierrez from Whittier, California, drove up and back in the rain to pick up the truck. The truck was in rough condition with the cab, rear fenders, frame, and the engine being the only things that were salvageable.

He tore it down in February and completed it in August of the same year. This 1949 pickup made its debut at the 2015 Grand National Roadster Show in Pomona and caught everyone’s attention with its flawless body laid on the floor. This is Alex’s second feature, the first (a 1939 Chevy Coupe) was featured in 2013 and we will now wait and see if he builds a third pavement-kissing classic.

Suspension: A Mustang II front suspension from TCI and 1961 truck rearend were added before installing the Firestone airbags and Goodyear rear shocks