Newsletter
Sign Up today for our FREE Newsletter and get the latest articles and news delivered right to your inbox.
Home » 1938 Chevrolet Cabriolet – Piece Offering 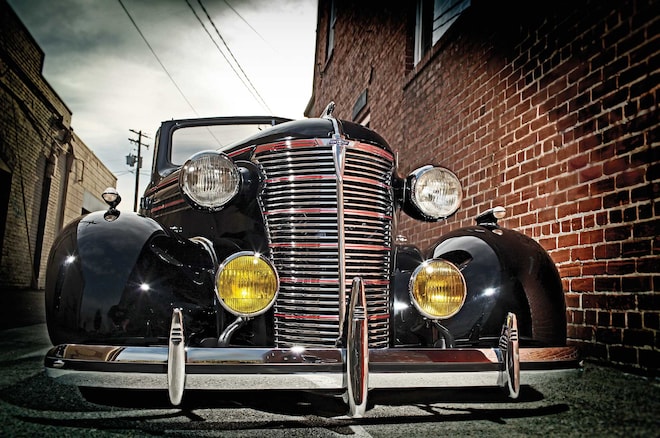 In 1938, after years of the Great Depression, if you were fortunate enough to own a 1938 Chevy Cabriolet, you were really somebody. Today, can you recollect the last time you saw one in person? Have you ever? If you were somebody back then, you’re sitting on quite a rarity today if you’re lucky enough to find one. Those in good condition bring big numbers. As luck would have it, Jimmy Duran was able to find one, although it took quite a while for him to find all of it.

While building a ’48 Chevy convertible, Jimmy came in contact with an older man who was sitting on a ton of spare parts. Among the many relics that were there for consideration was the body of a ’30s Chevy that Jimmy didn’t pay a whole lot of attention to, other than to notice it was missing quite a bit. At a car show, Jimmy spied ’38 Chevrolet that he really liked and noticed it looked remarkably similar to the lonely body sitting in the barn. He decided to go all in and went back to the elderly gentleman to inquire about buying this shell of a car. After some haggling on the price, Jimmy walked away with an incomplete ’38 Chevy Cabriolet. Now the tough part began, finding the remaining pieces.

Fortunately, Jimmy was able to find most of what he needed by searching through the piles of parts at the old man’s house. Then came finding what the old man didn’t have; that included an original banjo wheel, compass, seats, rear window, chrome, and gauges. Since he had to upgrade the driveline, Jimmy decided to go low with the rest of the project and have a ride even more unique than a factory version.

The rear sports an ’84 Nissan truck rearend with a three-link and Jimmy added a TCI Mustang II unit in front. The frame was C-notched to accommodate the lower stance and Firestone airbags were added. The car is powered by a ’59 235ci inline-six and 350 Turbo trans. Original wheels and dish hubcaps are wrapped in Firestone wide whites. The black paint was pinstriped by Harvey of Fresno, California, for some additional classiness.

The stock dash has been painted to resemble the woodgrain it once had and the original woodgrain on the garnish moldings still reside in the car. The upholstery was upgraded to give it a nicer look than what it originally had with the button-tufted seats and flourishes on the door panels. Although it all looks very original, tunes go through the iPod head unit, along with JL Audio amps with JL and Kicker speakers.

It still has quite the retro feel it had in 1938, but with some subtle modern conveniences that make it faster, louder, and lower. Jimmy stumbled upon the kind of barn find we all fantasize about and wants to thank his wife Martha, Ed Andrada, Tom, Vic, and Dan at Cal Fast, along with Manuel Mata, Oscar Munoz and Sal “the master from Wilmington” Borja for helping him get it all back together. It’s one seriously rare beauty.