Newsletter
Sign Up today for our FREE Newsletter and get the latest articles and news delivered right to your inbox.
Home » 1937 Taylor Tot & Pedal Car – From Pushed to Pedal 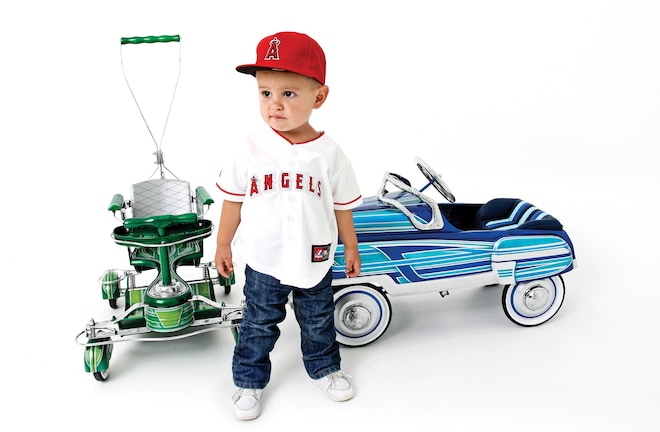 Sixteen-month-old Andrew Flores’ father purchased this 1937 Taylor Tot in Phoenix, Arizona. “I bought the Taylor Tot from my cousin who brought it from Arizona,” says Andrew’s father. “The stroller was rusted out, but I began working on it.” The stroller was taken to Tintaz in Buena Park, California, who used House of Kolor Candy Organic Green mixed with Candy Lime Gold and medalflake. All the metal pieces were taken to Jaime Castaneda before Kings Powdercoating in Anaheim, California, chromed everything. The build took about seven months to complete.

Andrew’s father has taken such great pride in seeing his son enjoy the stroller that he decided to build him yet another vintage toy for when he gets a little older — a pedal car. It was taken to Tintaz where they used House of Kolor Stratus Blue, Candy Teal, and Oriental Blue to paint the pedal car. Tintaz then used ostrich and vinyl for the custom seat. The pedal car was completed and ready for Andrew when he outgrows his stroller.