Newsletter
Sign Up today for our FREE Newsletter and get the latest articles and news delivered right to your inbox.
Home » 1937 Chevrolet Master Deluxe Defines the ’30s-era Gangster Cars 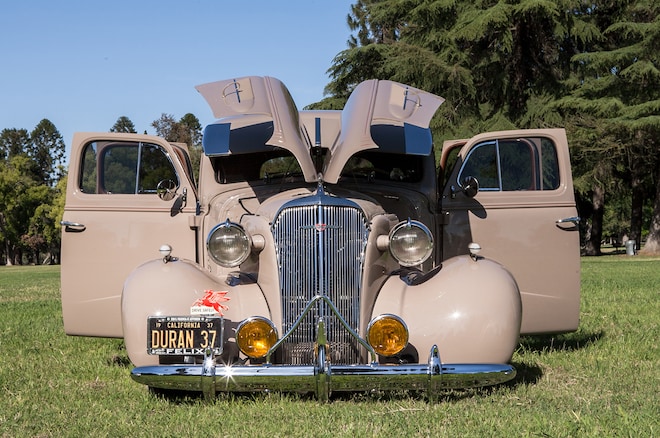 Over eight decades ago, when they were brand new, a 1937 Chevrolet Master Deluxe could be purchased for less than $800. Built to replace the 1933 Eagle, the Master Deluxe featured an imposing body and suicide doors, and along with its unique shape and endless curves, the final product is a sedan that’s become an essential piece of Americana, and lowriding. Just ask Danny Duran, owner of this beauty, and he’ll proudly tell you that the Master Deluxe is the be-all, end-all of vehicles from that era. Danny’s infatuation with ’30s-era gangster cars started as a child. He vividly recalls times spent with his father, William C. Duran, who had a passion for fixing and customizing while Danny watched as a youngin’.  Fast forward to present day and the only thing that’s changed is the fact that he now owns one. It all came about while searching for parts for his ’51 Chevy PU. During a chance encounter with shop owner, Steve Rothhotz, he realized Steve had a ’37 tucked away in the corner of his building in Kingsburg, Ca. He expressed interest and told Steve if he was ever to sell it, to give him a call. A few years passed before he received that call, but once he did, they struck a deal, and the sedan was delivered. Upon its arrival, Danny immediately called his dad, who came right over to discuss plans for the build.

The car came with a 350 auto trans and an open driveline rear end, so he reached out to Eric Essman, who helped him get a 1954 full pressure six-cylinder, along with an adapter kit. Ed Andrada then took care of all of the mechanical work in Kingsburg, while the body was sent to Fito Ledesma of Visalia, Ca, for body and paint. Then came the hunt for accessories, which included a Peckat Visor, skirts, Banjo Steering Wheel, GM Compass, GM fan, and rear splash pan, to name but a few. Tru Auto Trim stitched the interior in original Mohair material while the factory wheels were replaced with a set of 15-inch artillery wheels wrapped in 5.60 Firestone white walls.

Unfortunately, William C. Duran passed away from cancer in March if 2014. And while he never had the opportunity to see the car completed, Danny is still proud to reflect on one of his most memorable moments as he was able to take his dad on a cruise during the early phases of the build. In closing, Danny would like to thank his friends and family, who helped along the way and a special thanks goes to Manuel Mata and Eric Essman, who made this build possible and especially to his wife Norma for all of her support and patience that helped him make this dream into a reality.

With four features under his belt, Carlos Cruz has certainly paved his way as a role model in the Lowriding community.

In this day and age we’ve got friends, acquaintances, and followers, but only a few ever earn the honor and title of being called a “brother from another mother.”