Newsletter
Sign Up today for our FREE Newsletter and get the latest articles and news delivered right to your inbox.
Home » 1931 Sky King Trike – In Her Dad’s Footsteps 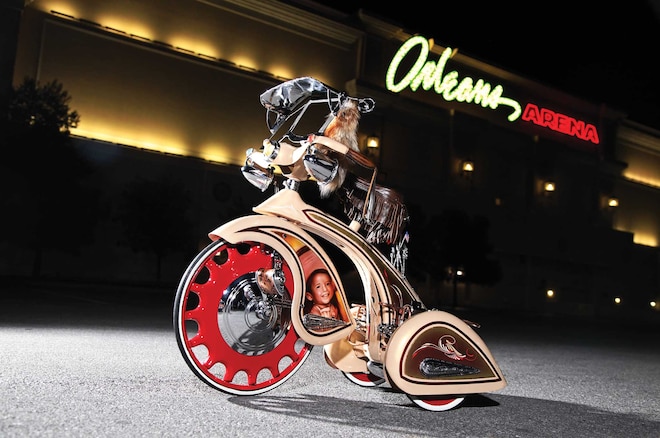 Destiny Salinas, of Plainview, Texas, grew up around lowriding and always wanted one of her own. “I wanted to have a project I could work on while my dad worked on his,” Destiny explains. Her dad, Carlos, a member of USO Car Club, found the trike for her. “The paint was a little faded but it was complete,” Destiny says. The trike was small enough for Destiny to build and show it. With her dad’s guidance the work on the trike began.

The first stop was to have James Campbell lay the beautiful khaki color paintjob with root beer brown fade. Ron Hernandez then laid red, black, and brown ‘striping with a touch of gold leafing. The paintjob looked great but it needed a little more, so Carlos contacted Alberto Herrera who added a young Tejana mural on each side of the front fender. While it was being painted, Ezekiel Garcia, in Dallas engraved the chrome. Juan Gonzalez added a little Texas twist by hand tooling the leather seat, pedals, and air tank covers.

Destiny didn’t send everything out to get done. Her and her dad tag twisted some of the chrome pieces, installed the stereo system, and created the air pump setup. Coming up with a unique look without chopping the trike up was a challenge for them. They succeeded when they went with a bomb look by adding artillery wheels and a Fulton replica visor.

“Being able to show with my USOs and having them always show me love has been a blessing, and being part of the lowrider culture has made me so proud,” Destiny says. She would also like to thank everyone who helped her build her trike.