Newsletter
Sign Up today for our FREE Newsletter and get the latest articles and news delivered right to your inbox.
Home » 2005 Harley-Davidson Softail Deluxe – Exodus 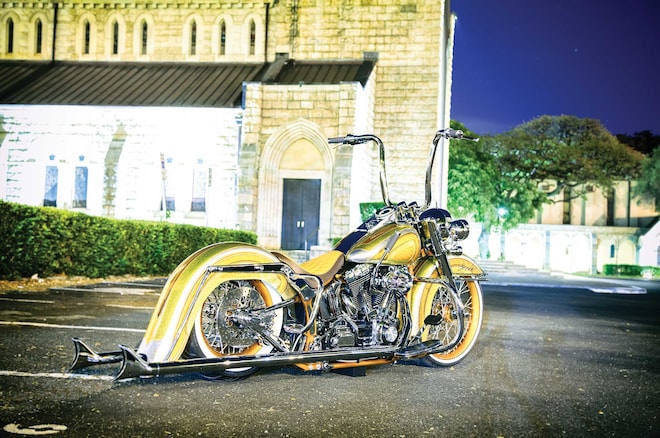 In 2001, Chris Parel was inspired to buy himself a motorcycle when his older brother, Leo, got his. It wasn’t until he was 18 years old that he was able to purchase it. His real dream was to customize a Softail with a Vicla style to it. Two years ago, Chris decided it was time to find and build his dream bike. His good friend Mike Pantil inspired him even more after he came out with his custom Vicla.

“I was determined to get a good deal on a Softail deluxe,” Chris says. He and his cousin Francis Park were on their way to check out a Softail with a salvaged title. Luckily for Chris, Leo found one with a clean title and cheaper than the one he was going to look at. They took a 35-minute drive to go check out the bike and after test riding it he bought it for $8,800. The Softail was all stock and in great condition.

The stock bike began its transformation with Mario Castro of Mario’s Autowork who stretched the fenders, built a center stand, custom-shaped the rear tire splash plate, and much more. Jason Soares of 66Rides installed the Misfit Industries air pistons. When the bodywork and modifications were done, the bike went to the Junkshop Pros in Honolulu, Hawaii, where Ron Carlos added the base, flake, and clear. DJ Wish added the custom candy pattern design. Chris then sent out parts to get chromed in California but the postal service lost his package. “The box had my swing arm, fork legs, calipers, and tons of nuts and bolts. Luckily after stressing for two weeks, the box was found and returned to me with everything already chromed.” Al’s Upholstery in Waipahu, Hawaii, did the seat while NBKustomz made a custom “Exodus” badge for the fenders.

Upon completion, Chris took his first ride through the streets of Oahu with his Section 8 MC members. “I rode my bike for the first time in Hawaii with my lady Jheyzle to commemorate my homie Mike Galutira who had died.

“I wouldn’t do anything different in the build of this bike because everything that happened led me to this moment. I’m truly blessed to have an opportunity to be featured in LOWRIDER magazine and to confirm my catholic faith.

Body/Paint
Front fender was stretched 3 and 1/2 inches while the rear one was stretched 7 inches The bike was then painted with House of Kolor custom candy pale gold, candy champagne copper, silver, bronze with flake, and finished off with gold leafing and pinstriping.