Newsletter
Sign Up today for our FREE Newsletter and get the latest articles and news delivered right to your inbox.
Home » 1964 Chevrolet Impala – Mechanical Influence 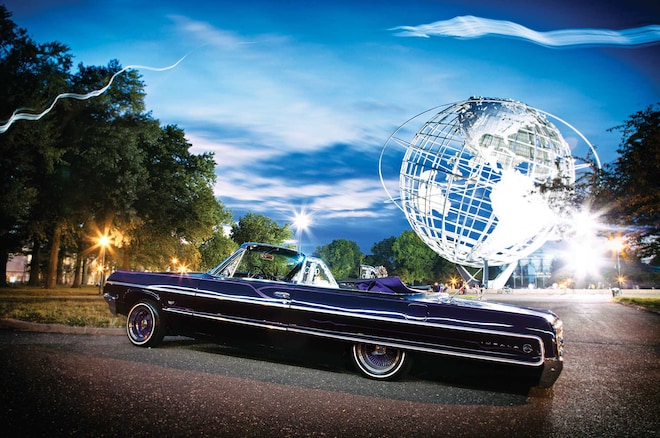 Joel Hernandez, of Jamaica, New York, was born in 1972 to a car mechanic. His father was always working on cars, and even owned a Nova and wagon. This had a big influence on Joel. By the time he was 17 years old, Joel had purchased his first lowrider. His passion for classic cars and hydraulics only grew from there.

As a family man, Joel kept lowriding and even got his kids involved by taking them cruising and listening to their suggestions. Joel had bought himself a ’64 Impala hardtop project. His teenage daughter Cassandra liked the ’64 but wanted a convertible. So Joel ended up selling his hardtop and began his search for a convertible. “I search for a project to build and I found this one on eBay in Maryland,” Joel explains. After having the winning bid, Joel went up to Maryland, loaded up the convertible in a trailer, and brought it back to New York.

The ragtop was in rough condition and needed a lot of work. It started off as a stock red color. “My daughter wanted it to be purple because she liked Barney,” Joel says. He began working on the bodywork and searching for the right purple to paint it. Once he found it, he took it to Send2Paint Auto Care in Astoria, New York, to lay the coats of candy. Dennis of Custom Lines in Queens added the pinstriping. Marvin Shivarain then added the window stitching and Steven Delgado in Brooklyn, New York, did all his chroming. Joel’s shop Astoria Sounds in Queens did the majority of the work, like the TPI installation; custom interior and massive sound system were all done in-house.

Since the car’s completion, Joel’s most precious memory is hitting switches in Time Square while cruising with his wife, Brenda, sons, Brendan and Joey, and his daughter, Cassandra, while playing Jay-Z’s “Empire State of Mind” song.

Unfortunately, his daughter became ill and died two years ago, so this build and feature is dedicated to her memory.