Newsletter
Sign Up today for our FREE Newsletter and get the latest articles and news delivered right to your inbox.
Home » 1961 Chevrolet Impala Convertible – Big-Boy Toy 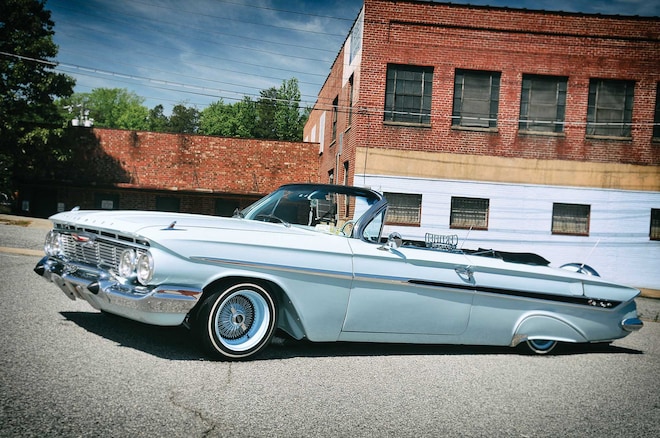 Only one thing is guaranteed for young men and grown men, the toys get a lot more expensive. As a child in New York, Fabian Soler began playing with Hot Wheels. From there it only got more expensive, graduating to remote-control cars. However, as adulthood got closer and closer, Fabian’s attention began to shift to the West Coast movement that was broadcast on TV and magazines. LOWRIDER magazine played a big part in his growth in the new culture, and everything got much clearer once he purchased his very first vehicle. From his first car to his next two, Fabian became more and more involved in the intricacies of lowriding.

One vehicle that always caught his eye was the ’61 Chevy Impala. In the New York area it seemed to be something that would always elude him because so many others desired the classic car. Fabian’s brother, Jimmy, was on the lookout for the ’61 and about a year into searching he found one in Pennsylvania. The brothers made the trip to take a look at the Impala and within days it was purchased and delivered. Fabian’s first step was giving it the lowrider image by adding a set of wire wheels and whitewalls to the car.

The motor was rebuilt and the transmission was swapped out so the Chevy would be more reliable and get on the road quickly. As a well-versed hydraulic suspension guy, Fabian decided to go with something a little more safe and comfortable for his children in the vehicle, so he opted for an air-ride suspension setup that would bring the heavy Chevy from the ground to the air for driving. With the stock interior being in such bad shape, Fabian ordered a whole new kit and installed it himself. For the outside, Fabian made sure the color was something that would stand out.
Fabian wishes to thank his wife, Gabriella, and his three children, Melissa, Melinda, and Jonathan for their support and understanding. A special thanks goes to his car club, Certified Riderz, and his brother Jimmy, for not only helping him locate the Chevy but for all his help through the years. He already has the Chevy apart again for even more custom upgrades, making sure that Empire ’61 will be on top for a very long time.

The ’61 Impala was distinguishable from other Chevys with its six-taillight design, crossed racing flags insignia, and Impala scripts on the rear fenders.