Newsletter
Sign Up today for our FREE Newsletter and get the latest articles and news delivered right to your inbox.
Home » 1958 Chevrolet Impala – Gentleman’s Style of a ’58 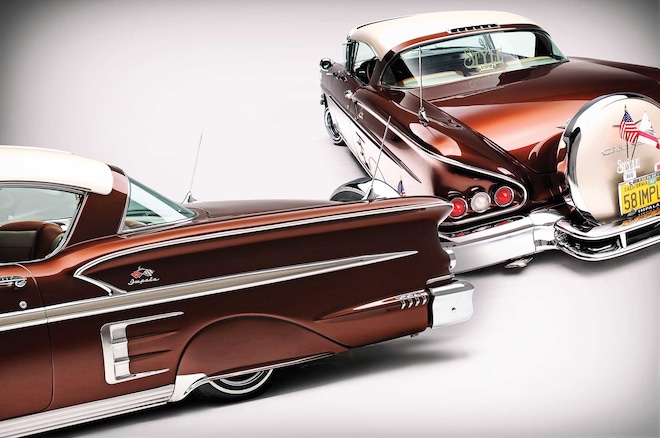 Are the days of being a gentleman over? Are paying for meals, opening doors for ladies, and asking parents for their permission to marry their daughter behind us? With the next generation of instant gratification-fueled millennials glued to their smartphones, it’s sometimes scary to think that those values are not only a thing of the past, but that the time and patience it takes to build a lowrider will also be forgotten in favor of turnkey, disposable hybrids. Scary to think that, but hopefully classic values and classic cars will continue to rub off on future crops who are next in line to continue the legacy.

Like the values that define a gentleman, some things just stand the test of time and never get old. A ’58 Impala is one of those things that really doesn’t need to be changed much. It came out of the factory looking good and still holds its timeless appeal. So how does one keep it simple, classy, and add some touches to it that’ll individualize it to their liking? Henry Montoya’s ’58 Impala is an exercise in simplicity. It doesn’t deviate much from factory original, but the areas where it does are refined, well executed, and elegant.

When he bought it, the car had a lifted rearend and Cragar mags. Although it looked good in that hot rod guise, Henry wanted to bring it down to the ground. Hoppo’s Hydraulics put on the Viair compressors, 5-gallon tank, and complete air ride system hidden behind the trunk paneling to give the car a nice dropped rake. A Lincoln Versailles rearend is brought to stop by factory disc brakes with a pair of ABS discs in front. The quartet of 13-inch Zeniths and Firestone rubber round out the rolling stock. The venerable 350 V-8 and 350 trans the car came with were already pretty beefed up and an Edelbrock carb, air cleaner, and manifold, along with plenty of chrome, keep it looking and running good. Work was done by Juan at Automotive Doctor in Rancho Cucamonga, California.

The interior was kept true to original with some nice touches to set it off. A Dakota Digital dash fits right into the existing space and monitors all the vitals. The Art of Sound installed the retro-inspired Custom Autosound head unit with Diamond Audio components that let the tunes play loud and clear. Elegance Auto Interiors did the awesome stitchwork on the original seats to give it a contemporary, luxury car feel without losing the original charm.

After seeing the colors on a minivan, Henry’s wife suggested he go with the Lexus sunset bronze and satin cashmere, reminiscent of the color of Gentleman Jack whiskey, which is the perfect complement to the interior. Not much on the outside was changed from stock, except the addition of N.O.S. spotlights, a visor, skirts, and continental kit. Mario’s Auto Works in Montclair, California, gets a “job well done” from both owner and onlookers for the immaculate exterior work.

Four years’ worth of work went into making “Gentleman’s 8” and it’s truly a contemporary spin on the best things of a bygone era. Henry would like to tip his hat to his wife, family, club, and Richard Cardiel for finding the car and helping him build it. We think it’s a beautiful car that couldn’t get anymore stylish.

GM hit a home run that continues to find favor among car enthusiasts when they created the 350ci V-8. This motor essentially began life as the 265 in 1955 until it was poked and prodded into the 350, which is basically the same block as the 5.7-liter that might be in your Chevy Silverado or one of the LS blocks that is in your Corvette. The actual 350 version came on the scene in 1967 as an option for the brand-new Camaro and has been one of the most dependable blocks ever produced. Think of how many you’ve seen powering both GM and non-GM cars. It was even the motor that powered the Tumbler Batmobile driven in the Christian Bale movies. The options for bringing more horsepower and torque out of this almost 50-year-old block are truly endless. Although this ’58 Impala was offered with the 348, which eventually morphed into the famous 409, the 283 that was also offered the same year is basically the same block as the 350 that is currently in this car.