Newsletter
Sign Up today for our FREE Newsletter and get the latest articles and news delivered right to your inbox.
Home » 1951 Murray Deepside – Lowriding Before Birth 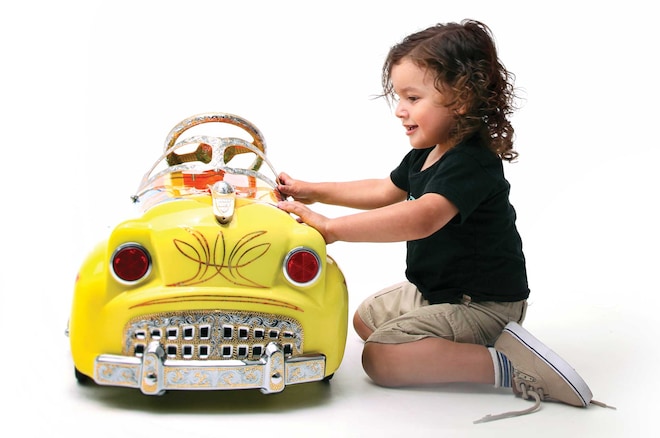 Before Alejandro “Chinito” Vega II was born, he was destined to be a lowrider. His father Chino Vega is a lowrider legend and saw this ’51 Murray Deepside pedal car at a fellow USO member’s house. The pedal car was in poor condition with an old white paintjob. “I asked him what he was going to do with it and he told me his son outgrew it and if I wanted it, I could have it,” Chino explains. With a baby on the way, Chino decided to take it and build it for his son. His goal was to have it ready to be displayed at his wife Jessenia’s “lowrider theme” baby shower.

Being a multiple LOWRIDER of the Year titleholder, Chino couldn’t just build a simple pedal car. He began by lowering it, removing the pedals, and custom-building the front and rear axles to hold the stroller wheels. The original rivets and front face of the stroller was shaved off. The custom-built bumpers and grille were sent out, along with the original steering wheel, hood ornament, and windshield trim to Engrave It Inc. in Ontario, California. There, Artie engraved it and added the two-tone chrome and gold plating. Alex at Dino’s Custom Upholstery in Arleta, California, wrapped the custom seat in orange, yellow, and blue suede.

Before painting it, they wanted to come up with a good theme for Chinito’s pedal car. Since Chino is from a town in Mexico known for sea turtles hatching their eggs, they wanted to go with a sea turtle theme. They figured a Finding Nemo theme would be perfect for him. Chino sprayed the yellow paint at C&L Customs and added the patterns. Brian Ferre at Brico Industries pinstriped it, and Alberto Herrera of Quality Art in Visalia, California, finished it off by adding the Finding Nemo-themed murals. Now with his first LOWRIDER feature, Chinito is well on his way to following his dad’s footsteps.