Newsletter
Sign Up today for our FREE Newsletter and get the latest articles and news delivered right to your inbox.
Home » Ritchie Valles – Unique Builds 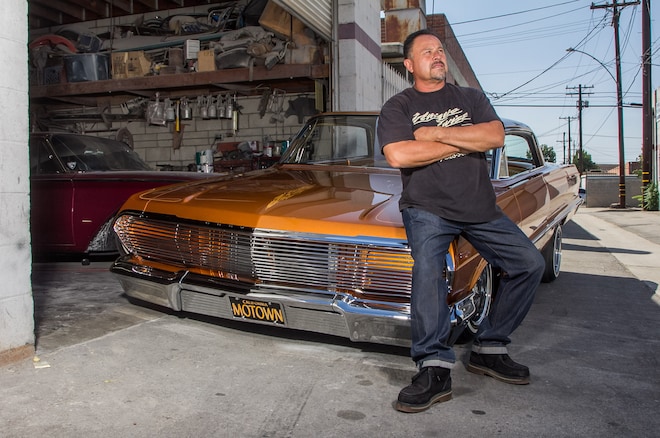 The ’70s were a time of excess and self-expression reflected in the cars of the day. These cars were now featuring paint schemes with more flare and flash than ever before. Those timeless bubble windows allowed you to peak and introduced the world to biscuit and diamond tuck custom interiors. It is no wonder this era would spawn some of the industry’s top custom car fabricators and builders. Such is the case for Ritchie Valles, who found himself surrounded by the custom car culture. “My brothers were into lowriders,” Ritchie says, “and my father owned an upholstery shop where I would apprentice under him. Dad was more into the traditional cars and definitely did not like the hydraulics, but what he especially did not like was the fact that I had decided not follow in his footsteps and go into the family business. Instead I chose to make a name for myself building custom cars.

“It was at the young age of 19 that things really starts taking off for me, with a centerfold feature in the recently created LOWRIDER magazine. My 1979 Caddy ‘Taste of Wine’ really put me on the map. Who would have known that I’d still be building custom-ordered cars 40 years later. But at 19, I found myself working a 9-to-5 at an aircraft shop, and it was there that I asked myself ‘Is this all I am going to be?’ It was at this time that I decided that to be the best, I had to surround myself with the best. So in 1980, I decided to join the infamous Lifestyle Car Club, known for their customized cars and vibrant paintjobs.” Ritchie’s environment was now beginning to resemble that of one of the industry’s top car fabricators and designers.”

Word spread of this real deal car builder, who was chopping Impalas in Burbank. He worked out of the original So-Cal Speed Shop, now transformed into Unique Twist Auto Body and Paint. Soon, Ritchie found himself working alongside the original king of customizers, the legendary George Barris, and as the demand for Ritchie’s custom creations grew, so did his list of high-end clientele. That long list would come to include Barry Weis, Cher, and Henry Winkler. He would eventually end up on the TV show Car Warriors, where he won the prized car.

Quality cars, however, are not built overnight … and with a waiting list that exceeds a year, you and your open checkbook better be ready when he calls your number. With a “less is more approach,” his attention to detail is what continues to set him apart. “I have a vision and follow it through, leaving a bit of my heart and soul in each build,” he says. The quality, technology, and complexity reach new heights with each passing year and for the next generation of builders I say, be humble with your work and pay attention to what everyone is doing. We are all talented in some way, with each of us having our own estilo, set your mark on the scene and don’t be a follower.”

Rides Rescuing A 1948 Pontiac Torpedo In The Name Of Lowriding

Johnny Martinez Jr. may look like any other proud owner of a clean lowrider bomb, but there’s so much more to him. Like many lowrider enthusiasts, he has a story to tell