Newsletter
Sign Up today for our FREE Newsletter and get the latest articles and news delivered right to your inbox.
Home » 2004 Harley-Davidson Fat Boy – Endless Possibilities 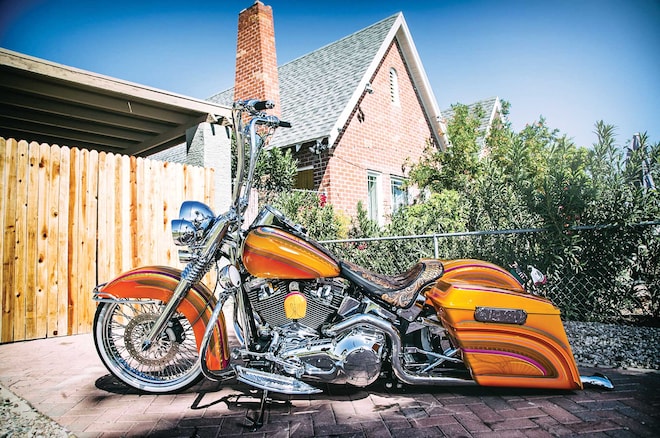 It was at a local Harley-Davidson dealership and a fateful trip to pick up parts that Mike and his father would spot a Pearl White ’04 Fat Boy for sale. After some negotiation, not only was Mike on the way home with parts for his father’s bike, he also now was on the road with his very own Harley. As he rode home, Mike began daydreaming of the endless possibilities this latest project had in store for him. Unfortunately, the finalized project you see before you has gone through quite the twist and turns to get here. “There are two things that stand out in any vicla,” Mike says, “your paint and your pipes.” Unfortunately for him, he had neither. A basic White Pearl paintjob was blamed for most of this bike’s misfortune. First, his back wheel came off as he was exiting a freeway, then he was rear-ended. It was then that he realized it was time for a change of color. First, however, was a visit to Superiors Car Club President Jorge Maldonado, who would stretch the rear fender and install a set of custom ear-shattering tailpipes. From there, it was off to Danny D Designs, in Baldwin Park.

“From 1 to 10, what kind of paintjob do you want?” Danny D asked. “I want a 15,” Mike answered. “I wanted a paintjob nobody would forget and more importantly a paintjob they would see coming down the highway. While over 13 different candy color combinations were being painted, Peter Tapia of Anaheim Plating was busy polishing and chroming all the bike’s metalwork. Joe Maldonado of Backyard Customs would also go on to install the 18-inch Carlini “Gangster Apes” provided by Militia Cycles. El Monte Stereo would install the custom Shotgun Shock air-ride suspension and the custom, one-of-a-kind, hand-tooled leather seat with ribbon patterns was created by the “Seat Guy.” With the highly anticipated Santa Barbara show just around the corner it was all hands on deck to finish this masterpiece. Mike, Joe, and longtime friend Jose Rodriguez would pull several all-nighters to ensure the bike would be completed on time. All the hard work would pay off, as Mike would take the First Place trophy at the show. As luck would have it, during his celebratory ride home a truck on the freeway would hit a 2×4 causing it to damage one of the bike’s saddle bags. Soon the call was made to Danny D notifying him that the bike was on the way back to his shop, only this time Mike gave Danny the blessing to add his beloved Pink color. “I’m glad I did,” Mike says, and to this day it seems that is what makes this paintjob pop, and it is what most people notice first.

I could not have completed this project without the help of my club brothers, especially Joe Maldonado and Jose Rodriguez-I thank you for all the late nights and hard work. Special thanks goes out to Jose Beltran who introduced me to Danny who is responsible for creating this paintjob. Above all else I want to thank my dad, Leonel Gonzalez, for all the support and helping me with my first bike.