Newsletter
Sign Up today for our FREE Newsletter and get the latest articles and news delivered right to your inbox.
Home » 1966 Chevrolet Caprice – Hooked on a Feeling 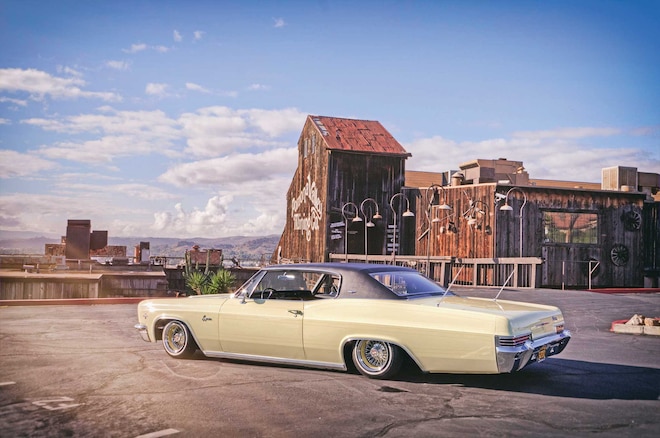 Bill Hayes Sr., of Pomona, California, says he has been into cars—particularly Chevy cars—for as long as he can remember. His very first ride was a ’56 Chevy Bel Air four-door. Over the years, Bill’s typical method of operation would be to buy a car, put a little money into it, then eventually sell it and go buy another car. His son definitely followed in his footsteps, also getting into cars and customizing them. Bill says that he had dragged his kid everywhere, from car shops to car shows.

It had been a while since Bill had bought and fixed up a car, but just recently he started getting that familiar itch again. He had come across this rare ’66 Chevy Caprice for sale. Bill’s mother-in-law knew he really wanted it and even offered him some cash to use for the purchase. Once the car was home and he started getting into this new project, he found out that it was going to be a much bigger mission to get it where he truly wanted it. There were times he felt like giving up; he had definitely put his blood, sweat, and tears into this car! With the encouragement and support of his wife, his mother-in-law, and his son, he pushed on through and the Caprice project started to really take shape.

On a beautiful Christmas Day in 2014, Bill took his family out for the first ride in the Caprice, known as “Hooked on a Feeling.” Even his mother-in-law was in the car. He wanted to take her out for one more special ride, just the two of them, so that he could show his thanks to her for all her help. Unfortunately that ride never happened, as she died. Although she may not be here physically, she is definitely riding along with Bill spiritually.

Bill gives big thanks for the emotional and physical support given to him by his mother-in-law, wife Linda, and son Bill Jr. He also sends a special thanks to his longtime friend, Eddie Flores.

Vehicle Nickname
Hooked on a Feeling

Body/Paint
Bodywork and paint done by L. Duran in Azusa, California. Paint color was in the original color of Lemonwood Yellow. Phillip’s Fine Lines in Upland added subtle accents of pinstriping and lettering.