Newsletter
Sign Up today for our FREE Newsletter and get the latest articles and news delivered right to your inbox.
Home » 1962 Chevrolet Impala Wagon – Just a Wagon 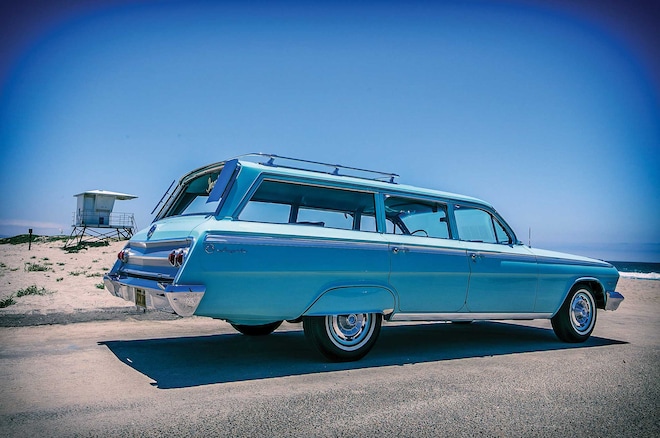 It is often said that good things come to those who wait, and waiting is exactly what Joel Ramon Castro, of San Diego, California, has been doing since the start of his latest build when a family road trip to Arizona turned into a potential car purchase. “I was looking for a convertible,” Joe says, “when my nephew mentioned he knew of a ’62 Chevy wagon sitting in a field.” Although weathered and neglected Joel saw plenty of potential, but as luck would have it the owner was not quite ready to let it go. Several years passed when he finally got a call from his nephew stating the wagon was finally up for sale, and soon enough the wagon found itself on the way to San Diego to begin its restoration journey.

With a budget and plan in place the restoration began with a trip to Imperials Autobody in San Diego where Robi would cover this classic in Twilight Turquoise Blue, making the car appear as it would have rolling out of a Detroit assembly line. The project, however, came to a screeching halt when Joel got the good news that his oldest daughter was accepted to UC Santa Barbara. A few years and several tuition checks later the restoration was finally back on track with an interior revival that included the installation of an original ’62 turquoise color combination matching original Chevrolet specifications along with a rare OE third-row bench seat. With the build halfway completed, the project was once again put on the shelf when his other daughter was accepted to her older sister’s alma mater. This time however, it would take even longer to restart, as his son would be attending San Diego State University. With two of his three kids now graduates he decided he could not wait any longer and it was time to finish this wagon project. The original ’62 small-block Chevrolet 283 was rebuilt along with OE powerglide transmission, 14-inch BFGoodrich whitewall radials were mounted onto OEM ’62 refurbished Chevy Impala hubcaps and after the endless amounts of original accessories he had been collecting over the years, such as a compass, vent shades, tilt steering wheel, along with power windows and seats were mounted in place the only thing left to do was put up that prestigious Impalas Car Club plaque in the back window.

“This project took a lot of hard work and effort,” Joel says, “and for that I would give special thanks to my wife, Elizabeth, daughters, Krystal and Karla, my son, Charlie, aka “Big Cat,” my brothers, Fidel and Jose, and more importantly my father and mother who taught me the value of an education.