Newsletter
Sign Up today for our FREE Newsletter and get the latest articles and news delivered right to your inbox.
Home » 1961 Chevrolet Impala Convertible – The Sweet Life 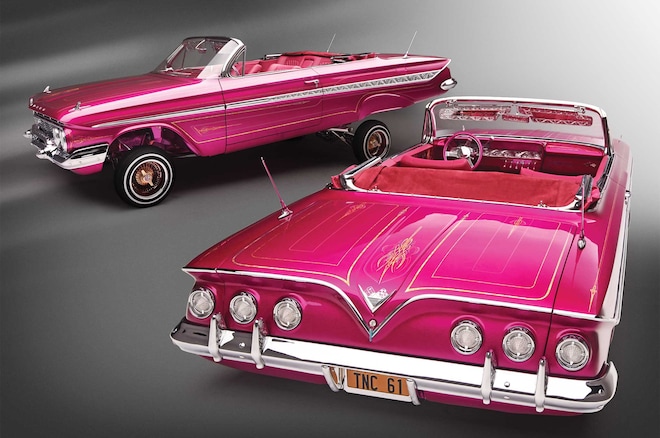 We talk to so many people and when we ask them about what stage of completion their car is in, we get answers like, “There’s still more things I’d like to do,” “I plan on totally redoing it again soon,” “It’ll never be done,” and the like. Most of us know that pain from firsthand experience. There’s the stuff you want to do and the stuff you need to do, but somehow it seems like you’re always chasing the pot of gold at the end of the rainbow. Thankfully Danny Ramirez knew when to say when. Looking at the detail on this ’61 Impala ragtop, it’s hard to imagine what more he could possibly come up with.

Danny picked up this ride from a friend because it was a good deal, but it was in rust-bucket condition. He turned to the guys at Top Notch Customs in Riverside, California, to help breathe some life back into it … and did they ever. Four Rooster pumps, with four aircraft filters, four Zig Zag slow-downs, four Adex dumps, and Tubular A-arms help drop the lowered frame that was molded and shaved off all the accessory brackets to smooth it out. Everything’s hardlined, and eight batteries underneath a custom cover keep all the electricals clean.

The body is sweet indeed. Top Notch spent countless hours molding the fenders, hood, and trunk, smoothing out the floors, recessing the firewall, molding and extending the skirts, shaving the mirrors, and creating one-piece bumpers before adding House of Kolor magenta with Shimrin 2 FX Spark. To set it off even further, Jaime Castilla did the extensive engraving, along with Mike Lamberson’s pinstriping, and Alberta Herrera’s muraling. Chromework was done by X Metal Finishings.

On the inside, a pair of ’92 Lexus power seats straddle a custom console where the window and other switches reside, along with the Pioneer head unit that powers two Rockford-Fosgate amps, Infinity speakers, and JL subwoofers. A Dakota Digital cluster sits inside a dash that was customized to remove the fan, switches, glovebox, and vents. A chrome ididit column, CFR steering wheel, Lokar pedal assembly, and custom visors complete the package. The stitchwork was done by none other than California Upholstery.

CPP disc brakes at all four corners help bring those Galaxy wheels to a standstill. They’re all getting power courtesy of the 350 topped with a custom air filter, Edelbrock 650 carb, and custom radiator. A 700-R trans turns a 9-inch rear with a custom driveshaft.

The guys at Top Notch came up with the name Candy Kisses for the car after deciding on the color scheme inspired by a pink pedal car at the shop. You might wonder why this color was picked, but when you think about how much it lightens up the body lines because of the car’s sharp edges, it definitely brings out the moldings more. If pink was good enough for Elvis’ Cadillac, it’s worthy of a ’61 rag.

Danny would like to thank the guys at Top Notch, and his wife and kids for the part they played in the project. “I wouldn’t do anything different,” Danny says. We don’t blame him. If only we could ever get to feeling that way about our own endless projects.

Aside from the U.S. putting its first man into space, the Berlin Wall starting construction, and tensions mounting with the new leadership in Cuba, changes were happening in the car world as well, particularly with Chevy. The famous 409 V-8 was introduced and later immortalized in a Beach Boys song. It’s said that only 453 ’61 Impalas were equipped with the SS option, and only 142 of those carried the 409 engine. The Super Sport edition was also unveiled midyear by Chevrolet and featured beefed-up springs, heavy-duty shocks, dash grab bar, padded instrument panel, 7,000-rpm Sun tachometer, and a four-on-the-floor manual transmission option. Fullsize cars were given a total redesign as Chevrolet’s Impala began its third generation. A bubbletop and two-door pillared sedan were also added to the lineup. A convertible like this was priced around $2,847 and weighed around 3,600 pounds.