Newsletter
Sign Up today for our FREE Newsletter and get the latest articles and news delivered right to your inbox.
Home » 1950s Taylor Tot – Gema 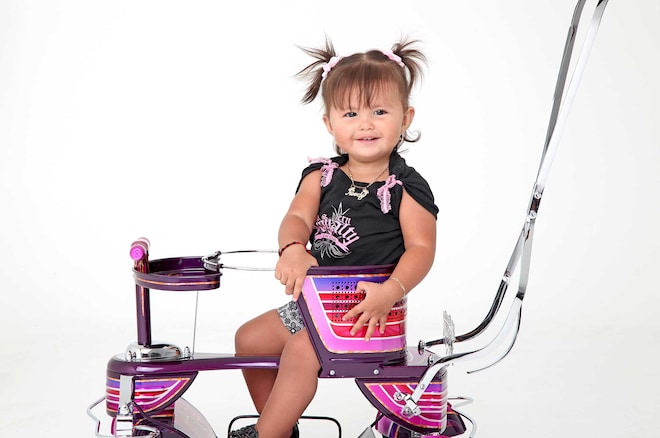 Isaac Villagrana a member of Southern Royalty Car Club and his wife, Diana, saw babies in Taylor Tot strollers while she was pregnant with Novely Gema and they decided to build one. They looked online and found one for $200 on eBay. “It was in really bad condition but it had potential,” Isaac says. Guillermo, the grandfather of Novely, helped her parents build the stroller.

The first stop for the stroller was at Sik Fabrications in Corona, California. There it received the multi-color paintjob with pinks, reds, and purples. Sik Fabrications laid the pattern with fades and fans while adding separation with white lines. The stroller parts then went to Mike Lamberson of Draggin Lines in Moreno Valley, California. Mike highlighted the outside of the patterns by adding gold leafing. He also added multiple pinstripe designs with pink, lavender, and gold leafing. Everything that wasn’t painted was sent out to A&B Polishing in Upland, California, to be freshly chromed out.

“Novely was growing so fast that we started getting concerned that she would outgrow it before the stroller was done,” Isaac says. “The first day she got on her little ride she couldn’t stop smiling and screaming, it was perfect,” Diana says.