Newsletter
Sign Up today for our FREE Newsletter and get the latest articles and news delivered right to your inbox.
Home » 1948 Chevrolet Fleetline – Bombing Tinseltown 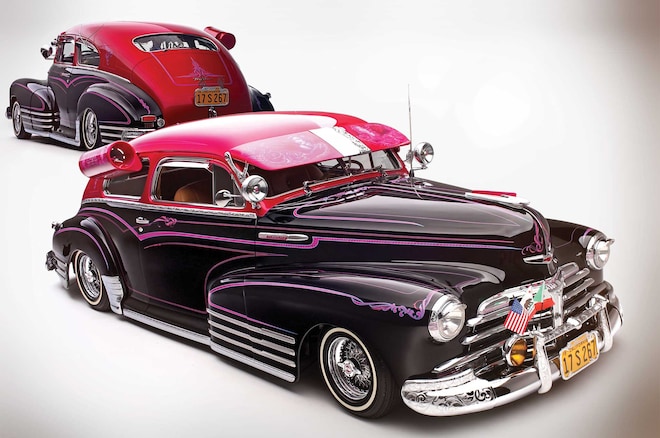 We’re all, at least in part, enamored by older things-in particular, cars. The technology and responsiveness of our rides may be a far cry from newer stuff, but there’s a charm in keeping things simple. Also, there was a care of craftsmanship in vintage automobiles that seems to be lacking nowadays on modern cars and everything else. They were built to last as long as you took care of it. Not so much with newer cars where the paint is bubbling after 10 years. I think we’d all take low gas mileage over plastic trim any day.

The same can be said about old movies. Smoky bars with men in fedoras, traditional all-or-nothing stunt work, and sets that had to be built instead of being faked on a computer brought a sense of realism because, after all, it was real. And let us not forget the ladies. Emblazoned on Martin Madrigal’s Fleetline are some of the finest Hollywood ever produced. Although they’ve all since passed on, Elizabeth Taylor, Veronica Lake, Lucille Ball, Marilyn Monroe, Lauren Bacall, and Rita Hayworth could steal a scene with just a glance in their day. They’re still turning heads on this ’48-the final year of that particular body style reflective of the art deco era of America before the space-age look of the ’50s came about.

Martin had been looking for a ’48 for a few years and finally found one in driveable condition. After driving it for a while he decided to do something a little different to stand out from the standard stock restoration. As a fan of the old Hollywood imagery, he had the right theme to go with and just needed to round out the package with the right components. The frame was powdercoated by Santos at Junior’s Finishing and reinforced by The Bag Man in Anaheim, California, before being given Fatman spindles and a 3-inch C-notch. Firestone airbags were also added, along with VIAIR compressors hidden under the fenders, and 3/8-inch hard lines by Adam Lopez keeping all the air flowing.

The drivetrain is all original with the 216 inline-six updated with a one-wire alternator and manual trans with vacuum assist. The gears in the rearend were sourced from a ’57 Chevy and front brakes were changed to 11-inch disc units. Aside from the clean brightwork throughout, OG equipment includes cloth wiring, overflow tank, washer bottle reservoir, tissue paper filter, and glass fuel filter. Three Optima Red Top Batteries ensure there’s always enough power.

The interior work is another California Upholstery masterpiece with two-tone leather and suede that goes nicely with the original woodgrain brought back to life by Bob Kennedy of Whittier. Several TV screens can be seen throughout the car, including one in the custom console and one large 22-incher in the trunk. The trunk is a true work of art with lighting in all the right places to show off the floating compressors, Pioneer woofers, and Plexiglas covers with the floral pattern sandblasted on it to cover the amps and other electrical components. Accessories on the interior run the gamut and are too numerous to list, but it’s all original GM equipment.

The body was kept true to stock and shot in House of Kolor candy magenta and black by Frank Navarro. The impressive muraling was done by Danny at DSG and his handiwork was accented by the fine pinstriping of the one and only Mike Lamberson. The undercarriage was pinstriped by Conejo and engraving throughout the car was done by Speedy’s Metal Finishing in Long Beach. Yolanda’s Plating did the equally eye-catching chrome work.

Martin would like to thank his sons Angel and Martin Jr. who pitched in a lot of late nights from wiring up the stereo to doing the amazing Plexiglas and fiberglass work in the trunk. He’d have been all on his own if it wasn’t for their help. He’d also like to thank his wife for her understanding of this family project. It’s a classic in its own right, but we’re sure those ladies immortalized in murals would approve of the final product. The car probably visited many drive-ins along the way, watching the movies they brought to the big screen.

This is the last year of the Aerosedan style of Chevy’s fleet. In 1949 the body was totally changed as the march toward the aerodynamic look of the ’50s began. Production of the two-door Aerosedan reached an impressive 211,861 units, but a hike in inflation brought the price to around $1,434, which was about 9 percent higher than the previous year. The model lineup for 1948 remained the same as the previous year. Trim was adjusted slightly with a vertical center bar added to the grille and a broader crease molding fitted below the windows. The 216 motor got precision main bearings instead of the older type that had to be reamed on installation. Since gas rationing was over and Americans were buying up cars left and right to see the country after the war ended, a popular slogan “See the USA in your Chevrolet” began appearing in ads. Dinah Shore later recorded a song by the same name in the ’50s.