Newsletter
Sign Up today for our FREE Newsletter and get the latest articles and news delivered right to your inbox.
Home » Slammed Out Pedal Car – La Ranflita 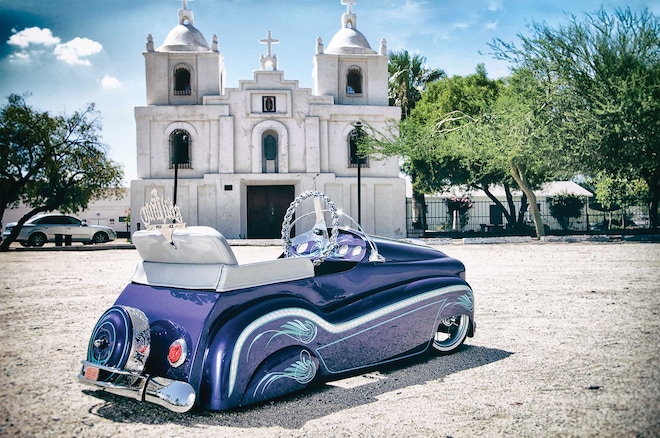 At just 11 years of age, Charyssa Padilla, of Phoenix has already accomplished what many adult men could dream of: getting a custom lowrider finished and featured in LOWRIDER Magazine! Of course, it wouldn’t have been done without the help of her loving father, Danny, and his connections with the right people in the custom car scene.

Charyssa explains that she has frequently been with her father, whether he was in the garage working on his ’59 truck or when he was at the Otra Vida Car Club functions. Being around the lowriding lifestyle not only created a special bond the two have ultimately shared together, but it allowed her to learn about responsibility, patience, and the trials and tribulations associated with building a cool custom ride.

Charyssa says that the build on her lowrider, a slammed blue pedal car, took about 10 months. Dad knocked out the body modifications, while Pete at Pete’s Auto Body in Phoenix finished up the metallic Belize Blue paintjob. The famous artist, Chavo, of Chavo’s Pinstriping, also in Phoenix, laid down the fine lines of pinstriping and silver leafing. David Sanchez of Dave’s Auto Body & Upholstery in Phoenix stitched up the gray vinyl and blue velvet plush seat. Mike at Kerr West took care of the chrome plating needs while Swings Engraving complemented it with some elegant engraving.

Charyssa says now that her one-of-a-kind custom car is complete, she proudly has it on display at the car shows and she’ll even bring it along to the car club get-togethers and cruises. She thanks God and her family for their help and support, but in particular, her biggest thanks go to her father for all the hard work he put in to building up this little cruiser with simply big impressions. Charyssa also sends out thanks to Otra Vida Car and Bike Club, Dave’s Auto Body & Upholstery, and a big “thank you” to Dave Sanchez for providing some building space for La Ranflita at his shop.