Newsletter
Sign Up today for our FREE Newsletter and get the latest articles and news delivered right to your inbox.
Home » A Visit to California Upholstery 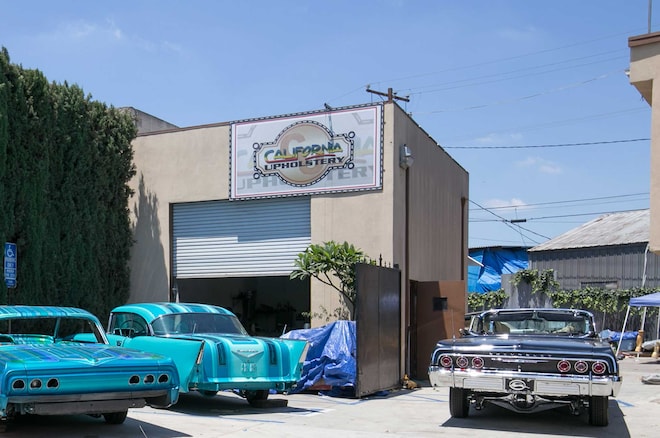 Bob & Sons, Henry’s Customs, Gabes Custom Interiors … all these names are synonymous within the custom upholstery world. And although all are legends in their own right, none have left an impact quite like California Upholstery has. From their innovating designs to the endless number of cars that are currently out on the street displaying their one-of-a-kind, highly sought after interiors. With assembly line precision, their interiors roll out of the Bell Gardens location as if it were a Detroit factory.

It was the early ’80s when Joe Camacho found himself working alongside his father, Jose, at their family upholstery shop, cutting and sewing everything from couches to the everyday original interior. As time grew, business ideals between them would eventually push Joe to pursue his own personal goals. “Dad wanted to keep doing traditional work and I wanted to do higher-end projects,” Joe says. So with a one-bay shop, Joe was off and running, taking in everything from original installs kits to full lowrider projects. “Because I had limited space, I had no choice but to finish these cars as quickly as possible,” he says. It was here that his assembly line productivity was born and still continues to this day.

Twenty years later they still do things the same way. As the clientele list grew, so did the shop, allowing Joe and crew to serve some lowriding royalty, such as Southside, New Movement, and Lifestyle car clubs. It would become commonplace for a car to go from his shop directly to the vehicle’s cover photoshoot. Eventually, California Upholstery’s popularity would also lead them to work for A-list celebrities, such as Gerardo Ortiz, David Beckham, The Game, Topo “The Wide Body King,” as well as many a Dub car.

“When I first started, all I wanted was to create interiors that I would want to be seen in and drive,” Joe says. And with interiors ranging anywhere form $2,000 to $12,000, he has made it affordable for anyone to own one of his unique creations. With a system in place, which will not allow them to fall behind, and with longtime workers, such as Santos Alonso (who has been with him for over 20 years), you can bet Joe will keep his word when it comes to completing a car. “Truth be told, it is my sister, Grace, who runs the day-to-day operations. She is the real brains behind this operation. I don’t know how she coordinates all of this,” he says. “With over 15 estimates to write a day, I really don’t know how she finds time to do it all. We couldn’t do it without her.” With a minimum three-month waiting list, make sure to call and reserve your spot today. Joe and family are waiting to hear from you.

What is the biggest change you have seen when it comes to upholstery?

Nobody wants original or traditional interiors any more. Even the once-sacred 1958 is getting complete custom interiors that are hot-rod inspired.

Who was your biggest influence?

Javier of Mexico Collision was the first to give me complete artistic freedom. During my single-bay days, he would drop off a car at 6 a.m. and would pick up the competed version at 6 p.m.

The painters always take all the credit and money. It seems as if majority of a project car budget always goes to the paint, with the remainder going to the interior. I’m glad to see more and more car owners using their budget to help push the level of fabrication and design.

How has social media impacted your business?

It is become a platform to showcase our work, serves as free advertisement. It is also a way to keep our customer updated with the progress of their cars.

Lowrider Garage will go live Friday, May 1st @ 5 once again, as we drop by California Upholstery and sew up another segment in our series of Instagram Live Videos