Newsletter
Sign Up today for our FREE Newsletter and get the latest articles and news delivered right to your inbox.
Home » 2005 Harley-Davidson Fat Boy – Heritage With Style 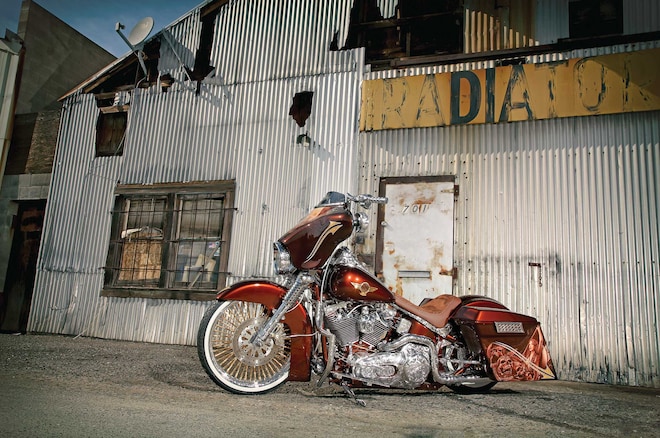 “I remember wanting a lowrider after going through my cousin’s LOWRIDER magazine collection. This was back in the early ’80s when I was just a kid,” Gerardo Jimenez, of Modesto, California, explains. It wasn’t until the ’90s that he got his first lowrider, an ’87 Monte Carlo. “I was still a young buck back then and didn’t have enough money to invest and go all-out on it.”

Gerardo bought this ’05 Harley-Davidson Fat Boy brand new at the Modesto Harley dealership. This time around he was grown and was financially stabled enough to go all out it. “I got the lowrider bug and I knew it was now or never,” Gerardo says. It wasn’t until 2009 that he decided to go all-out on it. “I wanted to build it with a classy flavor that makes a point but without overdoing it.” He began by tearing it down to the bare frame to have Mass Bros. powdercoat it. Kreative Koncepts in Modesto then used Axalta candy beer bottle brown to paint the bike. 4Zero8 Customs then airbrushed an eagle and snake on the fairing to represent the Mexican flag and Latina women with skulls in the ‘bags. Carlos Salas Engraving put their touch on almost every possible chrome piece on the bike. Parts were then sent out to West Coast Chrome before Modesto Customs reassembled the motor. Fine Line Upholstery in Manteca, California, stitched the seat.

“This build is dedicated to our Brown Pride, our Latino heritage, and style,” Gerardo says.

David “Dee” Espnoza has got plenty of great memories with his grandfather. The most vivid ones were the ones spent with his grandpa in his C10 and it was these memories that gave him an affinity for the C10 platform.