Newsletter
Sign Up today for our FREE Newsletter and get the latest articles and news delivered right to your inbox.
Home » 1989 Chevrolet Camaro IROC-Z – The Blue Agave 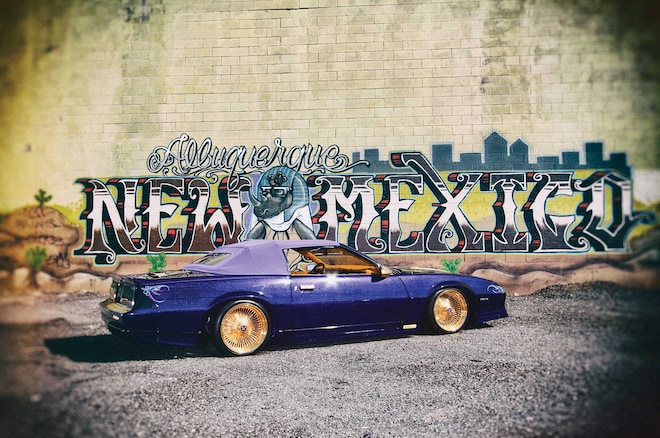 Ryan Martin is a 41-year-old bartender who moved to Albuquerque, New Mexico, from Chicago way back in 1989. He was only 15 at the time and had never seen a lowrider car before but it wasn’t long before he spotted one in his new Southwestern surroundings. His jaw just about hit the floor! He had always been into sports cars so when he decided to start building a lowrider car of his own, he found a way of mixing the two worlds like a finely mixed margarita. Rather than build the usual lowriding G-bodies, Cadillacs, and Impalas, Ryan and his girlfriend Lynda started a search for an Iroc-Z convertible.

In 1995, they found the right one at Quality Pontiac, the local car dealership. The ride was all stock and black in color. Ryan says it was in pretty decent shape, aside from the usual wear and tear. He bought it and drove it for a few months and then started the customizations. Ryan went on to focus on bodywork and paint. After the body was straightened and the silver base was put in place, the car then went to local painting legend, Rob Vanderslice. There, Rob carefully laid down the patterns, candy paint, and tons of clear. The Iroc was then wet-sanded down and buffed to a perfect mirror-like finish. Ryan had also disassembled the motor and removed everything metal in preparation for gold plating services from Duke City Bumper in Albuquerque or Electroplating in El Paso. At this same time, the interior was being done in navy blue and gold crushed velvet.

Once completed, the car was taken to car shows for the next five years where it was well-received by showgoers. An LRM feature was in the works but the timing just wasn’t right at that moment as Ryan decided he had to rearrange his priorities and turn his focus on family. The Iroc-Z was then parked for close to a decade! When Ryan’s son, James, was older and began to show an interest in the car-just a few years ago-Ryan and his now-wife Lynda felt it was time to resurrect the car.

A few new upgrades were done, including an added new grape-colored “stay fast” ragtop, a brand-new 700-R4 transmission with shift kit (built by Nacor Trujillo), new Flowmaster mufflers and Hooker headers, engraving by Krazy Kutting in Yuma, Arizona, and pinstriping by friend Mickey Horton out of the Phoenix area. Ryan also decided he wanted to ride a little lower so he and his friend Rudy Navarro installed a Firestone airbag setup with two pumps and a custom one-of-a-kind 3-D Chevrolet Bow Tie air tank fabricated by Fritz down in Las Cruces, New Mexico.

Ryan says he hasn’t updated the interior because he still wants the car to represent the lowrider style of the ’90s. Ryan now drives his car to all local shows and even some as far away as Indianapolis, winning many First Place trophies along the way. Ryan claims that he is helping his kids put the finishing touches on a matching pedal airplane and matching skateboard so they can start showing something in their near future.

Ryan sends big thanks to his wife Lynda and their three sons, Johnathan, James, and Sean for all their love and support. He also gives big thanks to his mother-in-law, Vivian “Nana” Armijo (may she rest in peace), for allowing him to build the car in her garage.

Upholstery
Gotcha Covered in Albuquerque did up a super-custom old-school-style interior in crushed velvet.