Newsletter
Sign Up today for our FREE Newsletter and get the latest articles and news delivered right to your inbox.
Home » 1967 Buick Riviera – One for the Road 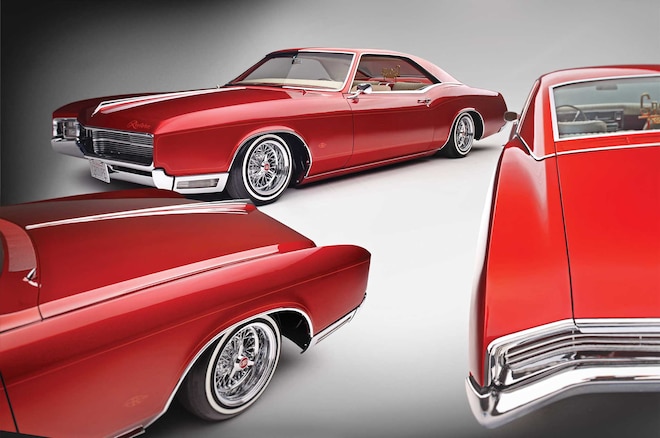 If we asked for a show of hands from everyone we talk to about how many of them regret having to sell a certain car, we’d see more hands than when the teacher asked which of us wanted to be excused to recess early. We’ve all had that one car that stuck with us above all others, for some reason. Many of us only have memories to remind us what it was like, but there are others who are determined to shell out the dough to relive the experience. Carlos Leos’ love affair with his ’67 Riviera had persisted long after he sold it. Then he was able to snap up another and it was deja vu all over again.

After Carlos’ neighbor located a rough but running ’67, Carlos took it home and began the teardown. Since this is one car that came from the factory looking good, Carlos opted not to deviate too much from stock configuration. Underneath, the hydraulic setup consists of two Homies pumps, four Delta dumps, six solenoids, and four batteries with 8-inch cylinders at all four corners. The original Wildcat motor and automatic trans were rebuilt. It’s all riding on 14×7 Truespoke wheels with 5.20 Premium Sportway rubber.

As an auto painter by trade, Carlos and his two buddies Rudy, aka “Burrito,” and Fabian took the car down to bare metal, shaved the emblems, painted it in a brilliant House of Kolor Candy Tangerine, added ghost patterns, and metalflaked the roof, which was also given a 42-inch moonroof by Carlos’ friend Juan. Danny D did up the car with his custom pinstriping, and the finished product definitely does the old Rivi justice.

Inside the interior was kept true to original with tan tweed with upholstery on the seats by Francisco, aka “Pancho” (RIP), and Carlos took care of the door panels, headliner, and dashpad. A Pioneer head unit and speakers, along with a Sony Xplod subwoofer brings the sounds into the modern age and installed by Little George.

When going into the build, Carlos wanted to prove to himself that he had one more in him. Since he believes this may be the last car he ever builds, he gave it the name “Achilles Last Stand.” If it is in fact his last build, the effort truly speaks for itself. He’d like to send thanks to his wife and kids for putting up with his build and Burrito and Fabian for their help (and headaches) throughout the process. We hope to see all 430 ci of it tearing up the road until he has an epiphany and decides he isn’t quite done yet and it’s time to build another car.

Buick originally began giving existing car models the Riviera name to designate a pillarless hardtop. It began with the Roadmaster and also encompassed the Super and Electra models until the Riviera became its own model in 1963. They were introduced with one of Buick’s famed Nailhead motors until 1967 when the Nailhead was discontinued and the 430 was introduced, which only had a three-year production run. The ’67 version had a monstrous 211-inch wheelbase and weighed approximately 4,200 pounds. A bevy of safety features were thrown onto the ’67 version, including an energy-absorbing steering column, non-protruding control knobs, four-way hazard lights, locking seatbacks, shoulder belt anchors, and a dual circuit hydraulic braking system. The Riviera was finally discontinued in 1999 and although concept cars to revitalize interest in the model have been debuted, Buick has not made definitive plans to bring the model back into production.