Newsletter
Sign Up today for our FREE Newsletter and get the latest articles and news delivered right to your inbox.
Home » 1964 Chevrolet Impala – Sun Break 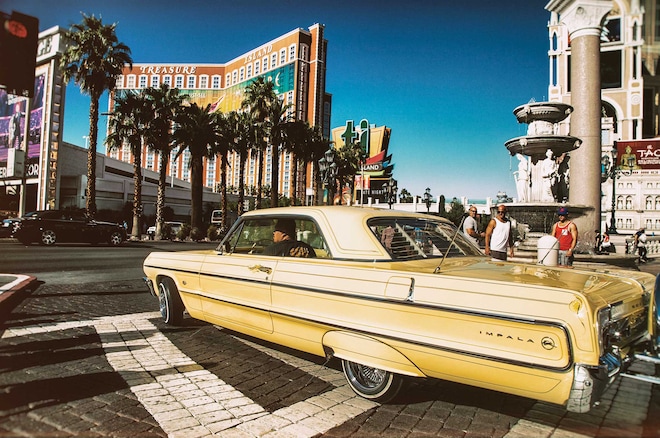 My Pham (My is his first name) from Seattle built Hondas in his earlier years. “My dad showed me how to work on cars when I was 15. My buddies then started bringing their cars over and I would help them work on them. I used to work on Hondas, muscle cars, basically anything I could get my hands on, but my real passion was lowriders.” His interest for lowriders started when he first saw a lowrider hitting back bumper in front of his high school. The thought of building himself a lowrider was always there but he never thought that he would be able to afford it, until a member of Eazy Duz It gave him a great deal on a ’64 that was in pieces and had no interior or motor.

At the time of purchasing the ’64, My and his wife Nora Yem were expecting a baby girl. “It was difficult managing my time between building a car and starting a family. For 3 and 1/2 years I would wake up early and stay up late. I had a goal to get the car done by a certain time and I made that goal.”

When he got the Impala, it was all torn down and in pieces. With limited knowledge of classic Chevys, he used another club member’s ’64 as a reference to figure out where the pieces went. With the help from Ted, My finished up the bodywork and had Simon Chan spray a Corona Cream paint on it while Chavo from Arizona striped it. Amos Upholstery in Arizona installed the interior kit. The highlight of the ’64 is the Pesco setup that was installed by fellow club member Keo Sanh. “The ’64 had a real classy OG look, so I wanted to build the setup that would complement it,” Sanh explained. “Getting the Pesco setup working and seeing the car come together was real memorable for me but not as much as seeing how building this car brought my family and friends together,” My says.

To some, it may sound selfish that My spent so much time building a car while having a newborn. “I built it for my daughter Skyla, so that we can build memories of the two of us cruising in the car. I added her name to the dash of the car so that she can always be by my side while cruising.” This was his first lowrider build but not his last one. “I feel that now I can build one better than this one and I’m planning on building many more lowriders throughout my lifetime.”