Newsletter
Sign Up today for our FREE Newsletter and get the latest articles and news delivered right to your inbox.
Home » 1962 Chevrolet Impala – Stylistics ’62 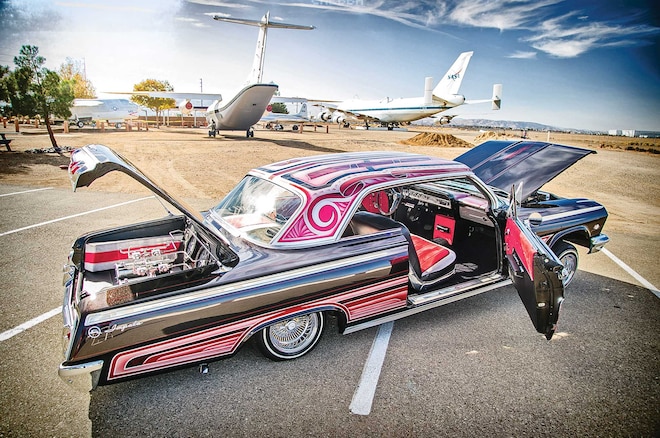 It’s 1962 and Chevrolet just released its iconic Impala, offering a newly redesigned and stylish sport coupe model. With an astonishing total production amount of 704,900, it’s no wonder they have become such treasured collector vehicles. For the Chavez family, that is exactly what this ’62 Chevrolet Impala has become.

It had been in the family for over 13 years before being passed down to Salvador Chavez. With a lowrider history that began at the age of 16, he knew exactly how to bring this cherished family jewel back to life.

As with most builds, first on the list was the paintjob. “There’s only one guy who I would trust with my car,” Salvador says. So after a custom Black Cherry pearl basecoat was applied, Pete of Krazy’s Kustom in Palmdale, California, laid down the intricate line work. It followed the car’s sleek body lines as well as graphics on the roof depicting the traditional Stylistic’s ribbon. From there, the task of completing the interior fell onto Ben Medina in Inglewood, California, who would blend a Midnight Black vinyl together with a two-toned combination of Crimson Red & Smoke Gray suede materials. Gangsters Kustom Trunks would carry the interior scheme into the trunk, encasing the custom two-pump chrome Hoppos hydraulic setup complete with polished hard lines and six Grey series batteries installed by Big Man Hydros in Lancaster, California. With accenting detailed engraving by Edgar Barba in place and triple gold OG wire wheels bolted on, this historic piece of America was finally ready to take a cruise … only this time with a bit of that lowrider flair.