Newsletter
Sign Up today for our FREE Newsletter and get the latest articles and news delivered right to your inbox.
Home » 1953 Chevrolet 235 Pickup – Truck of the Month 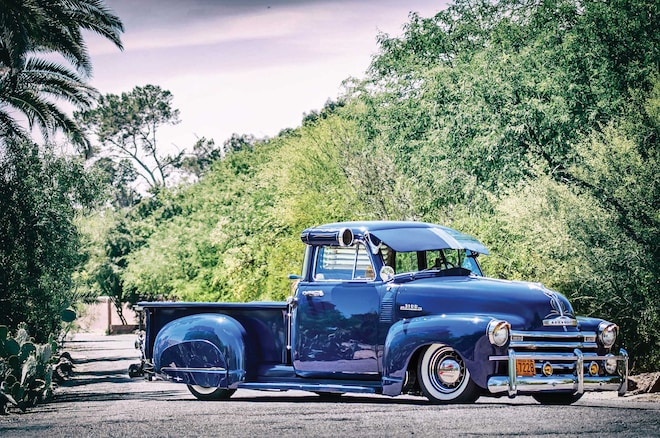 While most were stuck riding the big yellow school bus throughout high school, a few lucky students were fortunate enough to have their own set of wheels. For Richard Villanueva of El Paso, Texas, he had a car before he was even old enough to drive. At 10 years of age, Richard’s father bought him a ’53 Chevy pickup with the intentions of one day completing the build together. Driving it all through high school it was put away shortly after Richard’s enlistment into the USAF. “With my son protecting our country, I felt it was my duty to complete the project and have the truck waiting for him when he returned from his military duties,” Richard’s father says.

This was no solo project though; the intention was to have the truck completed by them both and with constant updates, so with approval from Richard this project was off and running. With a rebuilt ’56 Chevy 235 with open drive and straight pipes installed it was then in the hands of Guero who would cover the interior’s original bench seat with a cream-cloth accented with original stitching. From there, a custom Helix airbag suspension was installed by longtime friend Enrique in El Paso, giving the truck complete front, back, and side-to-side action. Nacho of Car Port, also in El Paso, layered the truck with a two-stage Midnight Blue pearl paint smothered with layer after layer of PPG clearcoat, along with Raul Ortiz laying down some pinstripe lines, giving this classic its finishing touches. With the project nearing completion, some of the final items included matching 15-inch artilleries mounted onto 205/75-15 Coker Classic radial whitewall tires, along with newly chromed and polished metalwork, as well as the mandatory accessories usually found with a Chevy truck of this era, like a Fulton visor, view finder, bullet swamp cooler, and Fulton antenna topper.

With a military career that has taken him to the Middle East and Afghanistan, Richard presently finds himself serving in Korea. In the meantime, Richard’s family will continue to honor his service by displaying the truck at local car shows and Old Memories events. Richard’s father would like to thank all the family and friends who helped along the way, but more importantly we’d like to thank you Richard for your self sacrifice and service in the military.