Newsletter
Sign Up today for our FREE Newsletter and get the latest articles and news delivered right to your inbox.
Home » 1937 Buick Special – The Wish 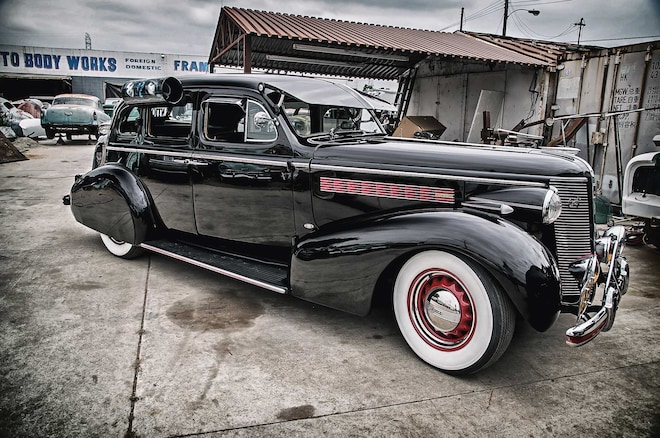 In 1937, Buicks and Louis Vuitton bags were special. That same year Louis’ son, Georges, died and with his death concluded the golden age of this now infamous-named brand.

No one could have imagined how a ’37 Buick Special and a handbag would cross paths decades later. You see, Noah Hipolito of Azusa, California, owned one of these four-door Touring Sedans before, but with an expectant wife he had to sell it to purchase a bigger home for his growing family. Never regretting the sale, but definitely wishing he would come across another Buick, he patiently waited for the right one.

Years passed and Noah found himself the proud owner of L. Duran Auto Body Works in Azusa. He finally found the perfect ’37 Buick to restore and the project was a breeze to complete because the majority of the work would be done at his own shop. From the Midnight Black paintjob and multiple coats of PPG urethane clear, to the charcoal gray cloth with stitching mimicking that of its original factory specs and additional wood grain accents, it was all in the palm of his hands. Noah and crew also installed a custom Helix airbag suspension kit and complemented the look with 16-inch artilleries and Firestone whitewall tires.

This ’37 was completed just in time for his wedding day, where he gave it to his wife, Carmen, as a wedding gift. Knowing the sacrifices her husband had made for them over the years she told him he could keep the Buick in exchange for a vintage Louis Vuitton bag. Without hesitation, Noah was off to the nearest LV store to seal the deal. “I got my Louis and still have my car,” Carmen says with a smile.

Interior
L. Duran in Azusa installed a charcoal gray cloth with stitching mimicking that of its original factory specs and additional woodgrain accents.

Body/Paint
Noah and team at L. Duran put down the Midnight Black paintjob.