Newsletter
Sign Up today for our FREE Newsletter and get the latest articles and news delivered right to your inbox.
Home » Groupe Car Club Tucson 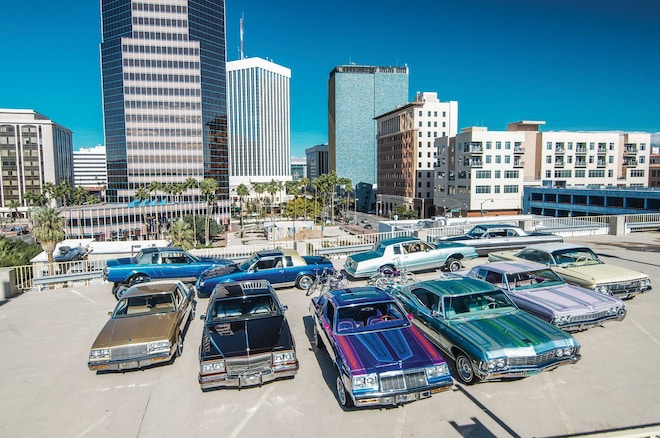 The Groupe Car Club plaque has been a well-known symbol in lowriding since 1971, busting out in East L.A. This club, like many others since then, began to prosper and with its name, and became an assemblage of over nine chapters. One of its newest additions is the Tucson, Arizona chapter, which became official November 10, 2012. Mother Chapter President Steve Alvarez Mott provided the guidance and approval for this chapter to fly its own plaque with the Tucson brand attached.

The Arizona Chapter is lead by President Jesus Rivera, and Vice President Tony Gomez. The club’s Sergeant of Arms is Jesus “Chuy” Olivarria, and Treasurer Sal Paz Jr. The club’s membership consists of 11 members who also include their families as an important support system. This club takes their members’ families along for the ride as illustrated in their mission statement: “As contributing members of our community, we encourage respect, love, and support to our families, friends, and others for the good of Groupe.”

Club meetings are held at Rodeo, Kennedy, and Joaquin Murrieta Park in Tucson. Club business usually involves local and out-of-town events, local charities that may need help, and progress on new cars being built. Members are from all around Tucson and as far as Casa Grande and the town of Maricopa.

Treasurer Sal Paz Jr. notes family is what holds the club together. “We always have our families’ input and that is what’s best for the club, including getting together for birthday parties, baby showers, weddings, and for the holidays. These type of things are the main parts of our lives.

“One of the club members, George Wood, is hearing impaired and just finished building a radical car hopper. So we have our own unique way of communication with him, while some members are learning sign language. Also, club member George Rivera is a heart and kidney transplant recipient who works with the Donate Life Organization, informing people of his story and other recipients’ stories in the community. I firmly agree with Sal’s convictions regarding his club because I have seen firsthand this young man grow up. I first met Sal decades ago when he was a small boy and his father, Sal Paz Sr., brought him and his brother Sebastian to the Mesa Super show. Sal Sr. was always so friendly and respectable, and was a great example for his children to see. The fruit seldom falls far from the tree, and in this case, Sal was being groomed into becoming a lowrider leader back then and didn’t realize it. But I have seen his father in his eyes and this part of our unique culture can only be taught with love, respect, and discipline, which is carried on to the next generation.”

In the short time that Groupe has made its stake in Tucson, they have been civic minded in many ways. These include partaking in the Tucson Holiday Light Parade where cars are decorated in Christmas lights, the University of Arizona Lowrider Showcase in downtown Tucson, donations to local charities, volunteering at CPLC Tucson Para Los Ninos Christmas Event, and coordinating car washes in the community with the proceeds going for funeral costs or health costs to someone within the club, family, or community. They also assist in helping a local youth group Semilla De Fe so that they could attend a Youth Conference in California.

Congratulations to the Groupe in Tucson as they continue in the long tradition of over four decades of serving their color of blue and remaining true!