Newsletter
Sign Up today for our FREE Newsletter and get the latest articles and news delivered right to your inbox.
Home » Greenspans – Lowrider Shopstop – Roots Run Deep 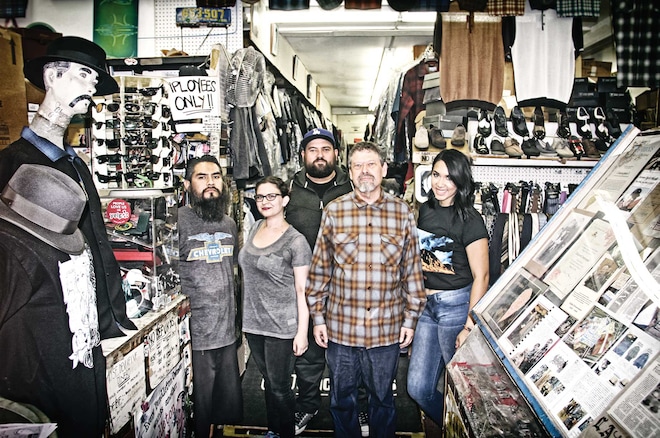 Stepping foot into Greenspans is like taking a step back into time. In its simplest form, Greenspans is a time capsule of fashion that is backed by organized chaos and a plethora of knowledge and history. Considered the last OG clothing store, Greenspans is a collective of the most hard-to-obtain deadstock fashion from the ’50s and ’60s. From Hush Puppies to Imperials, Stacy Adams to Pendletons, their inventory litters each and every aisle of the store. Even more impressive is that they know exactly where everything is.

To be honest, there really is no way to summarize what Greenspans has accomplished. To do so in a few pages would not do justice to the brand, as it would take volumes to properly give them the justice they deserve. The company, which was first started back in 1928, is a family-owned and operated business now run by a third generation of Greenspans. With Evan and Josh at the helm of the throne, the low-key duo continue to be silent influencers and tastemakers in the business of OG apparel, and their accomplishments run deep.

They’ve provided the wardrobe for hundreds of your favorite movies, have become a destination point for treasure hunting, and the understanding they have of their niche market makes them a powerful voice to manufacturers, especially the Pendleton brand. In fact, it was the strength of their opinion that ultimately led Pendleton to making and including XXXL through 5XL sizes in their lineup. In addition to that, they release one to two exclusive Pendletons that are sold only at their location.

Stepping foot into their shop is simply unreal. There’s something wholesome and family oriented about the character of the shop, and it was reminiscent of the days when my parents used to pay visit to their favorite “mom and pop” shops. The staff’s knowledge of the Pendleton and OG apparel game is unrivaled, and with over 100,000 pieces in inventory, it’s testament to their faith, pride, and dedication to the OG apparel game.

Within the first 30 minutes inside, I was impressed to say the least. I watched as one customer from El Paso, Texas, came to buy some shirts, followed by a lady from Miami, and just when things got interesting, another customer from New Mexico dropped in, followed by a Fender executive who came in to buy a Pendleton and some old-school shoes. The clientele at Greenspans is diverse and it’s safe to say that it remains a destination for travelers all across the world. In short, this is where the underground and ruling elite meet.

But what you won’t find here is a store that’s been prettied up to sell you product, and what you will find is a store that values its relationships with its customers. Couple that with the largest inventory of nostalgic fashion in North America, and you’ve got a recipe for success. In short, Greenspans provides an old-school ambience and experience that can’t be matched. While one could easily purchase a Pendleton online, you’d be robbed of the experience and the education you’d get at Greenspans. The stories you’ll hear and faces you’ll see are all a part of the experience and you just never know who you’ll run into.

Celebs such as Lady Gaga, Madonna, Ice Cube, and B-Real have shopped with the historic South Gate location, but ask Evan if celebs are treated any different than a regular customer and he’d be the first to say no. “Every customer is treated with the same amount of respect and integrity as the next,” says Evan. He further adds, “If I make one customer angry I stand to lose 20, so it’s up to us to build relationships and a rapport with each and every customer”.

When asked what he attributes his continued success to, his response was simply, “Dumb luck.” He adds, “We’ve been very lucky to have been blessed with some great and talented customers. My website was done by Big Tiny who I consider a renaissance man. He had just graduated from his trade school program and built my site to include in his portfolio. Back in the ’70s and early ’80s people from Goodtime Charlies in East L.A. used to shop with us and when they blew up, they told hundreds of people to come shop with us.”

Yet as our discussion carried on, he was quick to mention many of his supporters who have helped build their reputation, from Kid Frost and East Side Rendezvous mentioning them in lyrics, all the way to Australian band Boom Crash Opera who makes it a point to mention that their inventory and a blessing of good people is what has powered them through even the worst of times.

He talks about a time when he used to sell clothes to N.W.A. before they were big. Years later, when Ice Cube was doing the movie, “Boyz in the Hood,” he talks about how Ice Cube’s wardrobe stylist was having a hard time finding period-correct fashion, and that’s when Cube sent his wardrobe stylists to them. He goes on to talk about Chuco (RIP), and artists who have contributed art and referrals including L.A.’s own Freddy Negrete who told Lady Gaga to come check them out. In the end, these interesting stories were further proof that he’s held some key relationships that have paid off.

It’s almost safe to assume that his family’s love affair with old-school clothing goes far beyond passion. His old-school principles and values have followed suit and they are seen in the way he conducts himself. A man of his word and principle, Evan continues to expand his business based on respect. Respect for the fashion, the community, as well as the lifestyle. It also becomes quite apparent that he believes in building relationships, and these same relationships have become the foundation of their business. That said, we tip our hats to the Greenspan lineage for staying true to the game and giving us all a portal to keep our lifestyle covered – literally.