Newsletter
Sign Up today for our FREE Newsletter and get the latest articles and news delivered right to your inbox.
Home » 1966 Chevrolet Impala – Junkyard Jewel 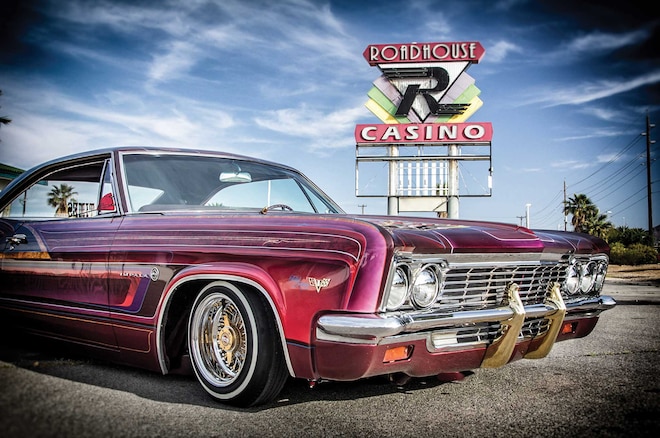 Rosendo and Jackie Romero are no strangers to lowriding. With their latest project recently sold and while on the way to Paris, France, this dynamic duo of husband and wife suddenly found themselves looking for a new car to build. As luck would have it, they ran across a 1966 Chevy Impala at a local junkyard and instantly knew this was exactly what they were looking for. “This project would start out as most, I just wanted a simple paint and interior,” says Jackie, “but the more we worked on it, the more we ended up doing to it.” So with an eight-month deadline, the project was up and running.

A mechanic by trade, Rosendo and longtime friend, Jorge rebuilt a 1987 Chevy small-block 350. They would go on to update it with numerous chrome and billet accents, as well as the custom paint that now adorns the engine compartment. Soto Upholstery in Las Vegas, Nevada, would create custom patterns with a blend of burgundy and red vinyl and light red cloth inserts.

In order to create this car’s signature look, Rosendo would team up with local renowned artist Zack Felix of Felix Dezigns. They would paint their latest canvas, creating an unprecedented five-stage paintjob using a special custom blend of colors from Matrix FX candy paints. Together, they would lay down a candy apple base with various white undertones, layer it with plum, violet, and Tantalizer Purple patterns, and accent it with pinstriping, tape shades, water-drop effects, fan shades, and gold leafing. With a custom two-pump hydraulic setup in place and triple gold plated OG 72-spoke Zenith wire wheels mounted onto OG Premium Sportway 5.20s, it was time to shuffle this “Baraja De Oro” and test their luck at one of Sin City’s local casinos.

Body/Paint
Rosendo and Felix Dezigns teamed up to lay down the cranberry candy base with numerous plum, violet, and strawberry red patterns with accenting pinstriping, tape shades, and gold leafing

In 1966, triple rectangular taillights replaced the triple round lights used on fullsize Chevys since 1958.