Newsletter
Sign Up today for our FREE Newsletter and get the latest articles and news delivered right to your inbox.
Home » 1961 Chevrolet Impala Convertible – Aces Low 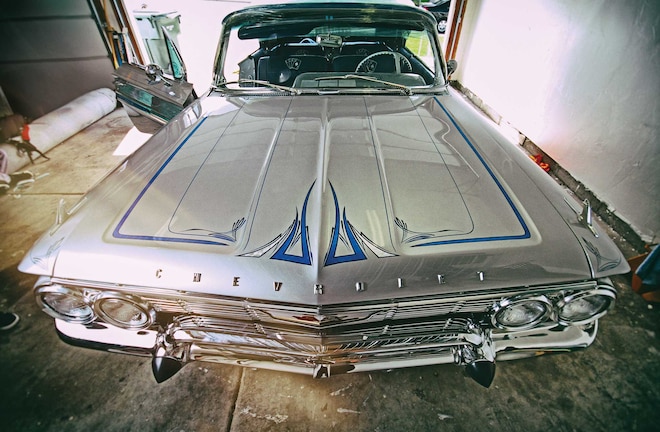 When we have our heart set on a certain car, sometimes we’ll do anything to find it. Matt Smith perused the Internet in search of a ’61 Impala rag, but alas, he came up empty. When he reached out to VMax of Ultimate Hydraulics in Norco, California, to help him find one, only two weeks went by before he found Matt a potential project car. As with many of us who finally find what we’re after, it was in pieces with no motor and trans. That didn’t discourage him from moving forward on it and having VMax turn it into the sweet silver ride you see here. After all, he’s a true gambler who knew this was a bet worth making.

VMax took care of the custom undercarriage that’s totally chromed out with hardlines running to two custom engraved tanks, two pumps with external pump heads and covers, three dumps, and six hidden batteries. The rear sports a 9-inch with a Y bar and it’s all brought to a stop courtesy of four-wheel disc brakes by CPP. For power, a chromed-out LS3 puts out plenty of oomph and a 350 trans keeps it all churning nicely.

The interior also sports the gambling theme with embroidering on the suede seats and door panels. Custom armrests were made and have controls for the power windows, while a custom console holds the four switches for the juice and TV monitor. A Pioneer head unit and amp powers all the JL Audio speakers.

The exterior was shod in silver with Oriental blue accents and gambling murals can be seen throughout the trim on the car. The gas tank door is also adorned with the car’s name: “Aces Up My Sleeve.” Matt knows his way around a deck of cards, so believe it or not, some of the money that went to fixing up the car actually came from his winnings.

Although there’s still a lot more Matt would like to do to the car, it’s certainly another masterpiece to come out of the Ultimate Hydraulics’ garage. Special thanks go to VMax and crew for all the work. “I’ve got a lot of love and respect for that guy,” Matt says. Keep the card tricks coming Matt. Apparently you know how to push your luck.

Vehicle Nickname
Aces Up My Sleeve