Newsletter
Sign Up today for our FREE Newsletter and get the latest articles and news delivered right to your inbox.
Home » 1954 GMC Pickup – Generational GMC 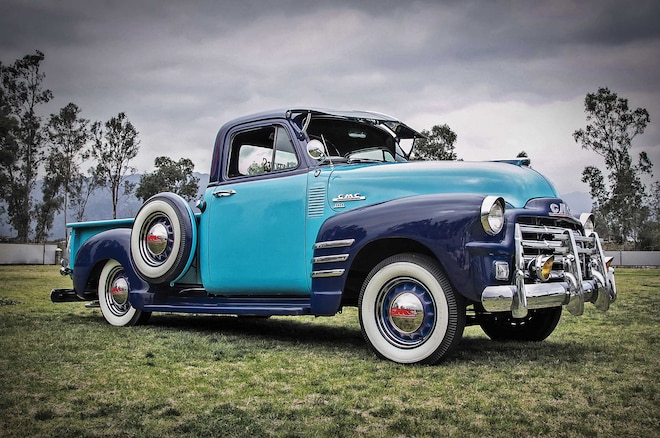 Inspirations for builds come in many shapes and forms. For many, it’s something we’ve dreamed of our entire lives, and for others it’s simply something that has been passed down from generation to generation. Raul Salazar of Azusa, California, had purchased a 1954 GMC pickup. After tinkering with it for over 20 years, he was still a long way from bringing this antique relic back to life. That is until his granddaughter Victoria was born in 1998. As a baby, he would take her to all the car shows and as she got older she would proudly say, “Your truck is going to be mine one day grandpa.” Ruben was not about to let his granddaughter be seen cruising around in a half-completed lowrider. So with newfound vigor and enthusiasm, Ruben set off to finally complete a lowrider worthy enough to carry his granddaughter’s name.

Noah Duran of LDuran bodyshop in Azusa was called upon to give this truck its signature two-toned dark blue and Deep Sky Blue color combination. Longtime friend Agustin lent a hand by sewing together the interior’s cloth bench seat with a contrasting dark slate gray. Rene Salinas installed the custom Clarion audio system. The original 1954 GMC 235 was tuned up and firing on all cylinders when the custom wood-grain bedliner was installed. With numerous NOS accessories bolted on, like passenger-side spare mount and OE Firestone whitewall tires mounted onto 16-inch artilleries it, was finally time to take La Victoria out on the boulevard.