Newsletter
Sign Up today for our FREE Newsletter and get the latest articles and news delivered right to your inbox.
Home » 1947 Chevrolet Fleetline – Top of the Line 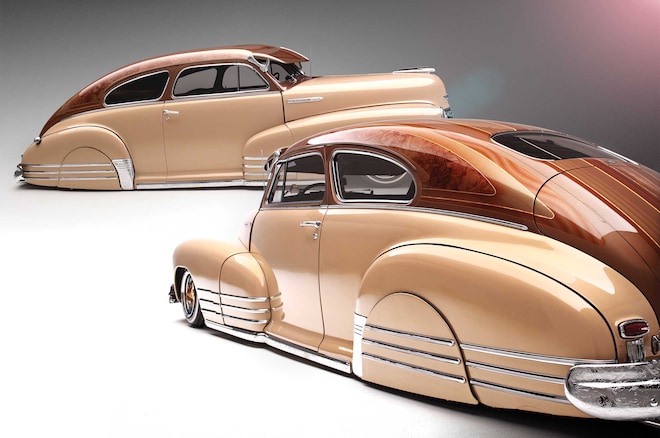 As parents and car buffs, we all secretly hope that we can pass on that gene to our children and that one day they’ll carry on that same love for cars. Matt Sherman bought this ’47 Chevy Fleetline with the intention of doing a full buildup, but like any good man, when he realized he’d soon become a father, he put the priority on his family and sold the car to his friend. In the ensuing years, Matt’s son Sy was definitely a lowrider in the making, and became just as passionate about these cars as his father when they’d go to shows together.

Unfortunately, life has a way of dealing us a difficult hand when we least expect it. Sy became ill with a rare cancer and passed away after a long fight. But the twist of fate and Sy’s influence didn’t end there. By chance, Matt happened to be at a festival and ran into the son of the friend he sold it to. Matt learned that his friend really never got the ball rolling on completing the car and that it was still at his friend’s house in the same condition he sold it to him. Matt called up his friend and the next day went to go pick the car up. It was on the road six months later.

As if all that wasn’t enough, while driving it to a cancer benefit, one of the wheels fell off and destroyed the driver side of the car. Although a lesser man might have given up after that, Matt used it as an opportunity to restore the car again exactly the way he wanted. So once again, he let tragedy propel him forward until he pulled off this recently completed beauty that is nothing short of true lowrider. “I honestly feel like with the way my son passed and having to give the car away to take care of him, he gave the car back to me,” Matt reflects. So let’s take a look at how Sy’s spirit lives on in this classic.

Matt tunneled the floor so it’d lay lower, dropped the uprights in the frontend, and put in a four-linked Camaro rear. It’s all suspended by an AccuAir e-Level airbag setup powered by a single battery. The setup was done by Matt’s friend Greg Lazerinni. Everything is chromed and painted underneath, and it’s all rolling on 13-inch Zeniths with Premium Sportway rubber.

Power comes from a ’58 Chevy 235 inline-six connected to a ’47 Saginaw three-speed manual trans turning a two-piece Impala driveshaft. The motor is old school with dual Rochester one-barrels on an Offenhauser intake.

The interior was kept faithful to the original, but the dash and trim have pearl wood grain patterns instead of the traditional dark backgrounds. Sid’s Upholstery recovered everything in original-style fabric. From the traffic light viewer to the bakelite buttons, not much looks out of place in the interior. The original radio was refurbished, but inside the glovebox resides an Alpine stereo connected to two Earthquake 6x9s, two 5 and 1/4s, and tweeters.

From stem to stern, it not only screams lowrider on the outside, but is also a tasteful blend of new and old. Chrome and engraving were handled by Krazy Kutting and can be found on everything from bumpers to air cleaners to core support. Muraling was done by Skip Sanchez and pinstriping by Eddie Padilla. Matt, who owns Imperiouz Autobody & Suspension in Salinas, California, took care of the bodywork and Axalta two-tone paint.

We’re happy to see this old ’47 finally come to fruition almost 20 years after Matt originally bought it. For years, the car was, as Matt puts it, “just a rumor.” There was a lot of talk about it getting finished, but it never seemed to get there…until now and Matt made sure it spoke to the people involved in getting it up and running. Hands praying for his son, a picture of his wife, and his crew from his shop can be found in the murals. Thanks go out to Eddie Padilla, Skip Sanchez, Westend Car Club, Matt’s wife Veronica, and most importantly his son Sy. We wish you many happy miles with this sweet ride and we’re sure Sy’s spirit will be riding shotgun right along with you.

Chevrolet produced its 20 millionth vehicle in 1947, which happened to be a Fleetline Aerosedan, same as what’s featured in this article. The sleek two-door fastback was Chevrolet’s most expensive two-door sedan they built that year, as well as their top-of-the-line and most popular model. Production of the ’47 Aerosedan reached 159,407 and had a sticker price of around $1,313. Side hood and belt moldings were eliminated on the ’47 model and replaced with a thin strip of stainless at the crease below the window. The other models offered that year were the Fleetmaster cabriolet convertible, Fleetmaster Sport Coupe, Fleetmaster Town Sedan, Fleetmaster Station Wagon, Fleetline Sportmaster, and four Stylemaster models. The most expensive and least popular model was the Station Wagon. At $1,893, only 4,912 of these eight-passenger “woodys” were built, so they get big numbers from collectors. All models offered the 216 inline-six and three-on-the-tree manual transmission. With the GM strike over, and demand far outweighing supply, 1947 production vehicles climbed to over 684,000.