Newsletter
Sign Up today for our FREE Newsletter and get the latest articles and news delivered right to your inbox.
Home » 2004 Harley Davidson Road King – King of the Road 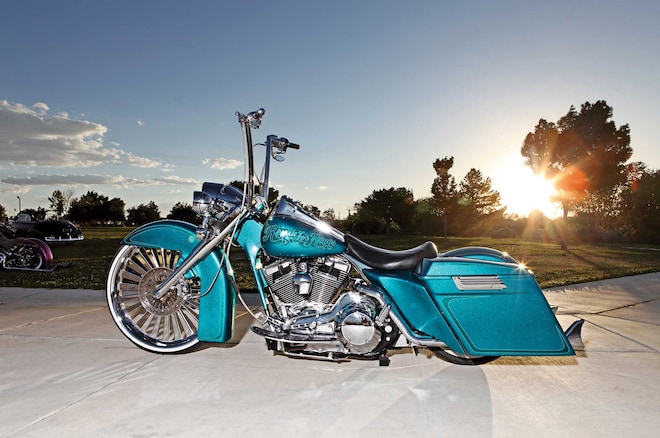 Donald Montoya of Albuquerque, New Mexico, was born and raised around Harleys. “My dad, my brother, my sisters, my uncles, and my aunts all ride.” His father owned a Harley all his life, but after having a few kids he decided to sell it to focus on raising a family. “When I was about 10, my dad got a Harley again. Since then I’ve always wanted one to be able to ride with my dad,” explained Donald.

In 2008, Donald was approached about selling his lifted 1999 Chevy Silverado work truck. “I was hoping to get seven or eight grand, but he ended up offering me $12,000 for it.” As soon as he was cashed out, he went with his mom to purchase this 2004 Road King.

He met Mark Lujan and the guys from La Vida Customs at a local show. Mark explained all the different customizing possibilities one can do to a Harley. “Mark told me to go to his shop the next day to check out some stuff. I did, and the next thing I know, we are tearing down the bike and fully customizing it. We added 21-inch wheels in the front, stretched bags, beach bars, fishtail pipes, and a new paintjob.” That was the first of four transformations this Harley would receive.

The latest build took Donald and the La Vida Customs crew four months. They began by stretching the hard bags, molding the taillights, and stretching the rear and front fenders. Mark Lujan then sprayed a House of Kolor candy teal. Victor Cordero and Joey Demny added pinstriping, while Pete of Innovations in Albuquerque used black leather and alligator for the seat.

A raked neck, center kickstand, and 26-inch SMT Machine wheels with 26×3.5-inch Vee Rubber tires were added. For the final touches Victor Cordero of San Diego, California, added the murals of Kings and Queens. “Harley Davidson made all kinds of bikes, but only one king and that was the Road King. To me the Road King is the king of the road, so I ran with that for a theme and named it Rey De Reys (King of Kings).

Currently the bike is receiving its fifth and craziest transformation yet. The build should be in its final stages by the time this issue hits newsstands. “I want it to look more like a sled,” says Donald who wants to thank Mark Lujan, Jerome Rocha of Southwest Choppers, his brothers at La Vida Customs, and his wife for supporting him.

Rides 2019 Southwest Choppers Softail – Not Off The Shelf

Most people buy a project and then tear it apart and go from there. Jerome Rocha didn’t start his bike project that way. He started with a brand new frame that he had hanging in his garage