Newsletter
Sign Up today for our FREE Newsletter and get the latest articles and news delivered right to your inbox.
Home » 1970s Schwinn Bicycle 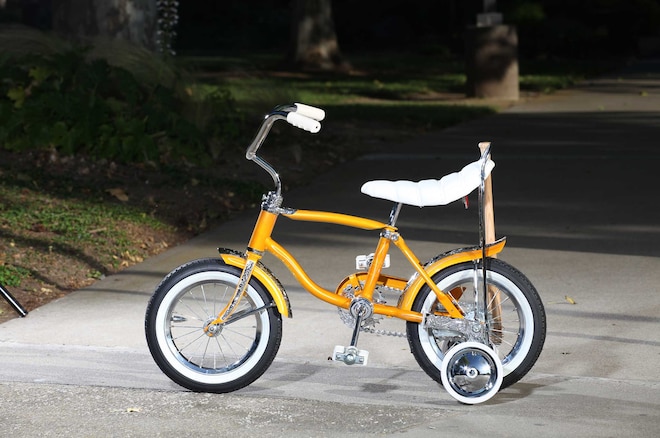 Dominic Perales’s father began looking for a bike when he realized that he was outgrowing his Taylor Tot. He was lucky enough to find one on eBay. “It was in great condition and I was able to get it for $100.” Once “Lil Tiger” came in, he took it apart and sent out a few parts to Miguel Chavez for engraving and plating, and the rest to New Age Plating.

The hardest part of the build was deciding on a candy paint for the bike. Once they decided on a House of Kolor yellow pearl, it was taken to Gilbert Acosta to have it sprayed. Raul Delgado added patterns and Smudge in San Jose, California, added the striping. Wesos used white vinyl to bring back the seat to its original form.

They were able to complete the bike build before the Socios car show in Sacramento, California. “It was important for us to make that show as that was the first show he attended with his Taylor Tot and now with his Lil Tiger.”