Newsletter
Sign Up today for our FREE Newsletter and get the latest articles and news delivered right to your inbox.
Home » 1970 Chevrolet Caprice – OCD Caprice 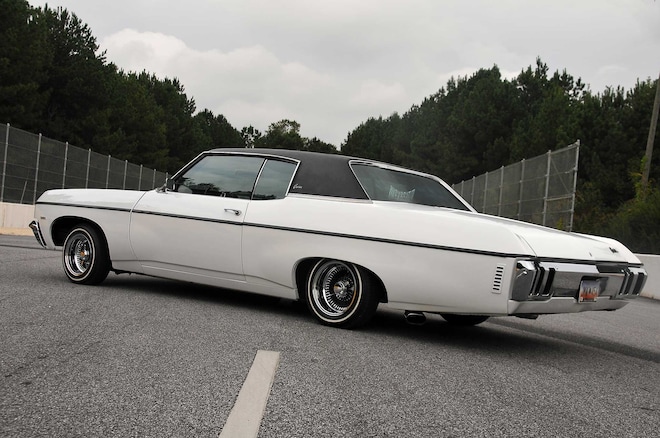 There are many different custom paths you can take when dealing with a classic vehicle. Some people restore them to stock, while others customize them to be lifted up or lowered. For 39-year-old Perry Bunker of Anderson, South Carolina, when he thinks of classic Chevys there is only way to build them.

In 2012, a friend and fellow member of Obsession C.C., Deon, purchased a 1970 Chevy Caprice that had been lifted with larger wheels. The Chevy was brought to Perry for paint and body, while Deon reworked the motor. The bumpers and trim were all sent out to be chromed and step by step the Caprice was brought back down to the ground.

Perry continued to press away, making sure that every detail was completed for his friend. After numerous weeks of Perry’s hard work and love going toward the build, somewhere along the line he started to fall in love with the project. With a full arsenal of project classics at his disposal, Perry offered a trade for an Impala he was working on. The deal was made and the hard work he had put in was now his own.

Combining the restored feel with his passion for lowriding, Perry looks at his classic as the best of both worlds. As the owner and operator of Prime Towing in South Carolina, Perry is always on the move. He is a longtime member of the Obsession Car Club and he makes sure his Caprice makes it to almost every show. He wishes to thank everyone who helped him along the way to make King Kracker the classic beauty it is today. Special thanks to Deon Willis, Ron Bunker, Murr, and everyone that told him he would never make it. There is nothing like success to breed motivation.

Engine
A 1989 Chevy 383 stroker was built and fitted by Deon Willis and given an Endurashine intake with a 750 double pumper carburetor. A billet aluminum radiator was built by Kar House Custom Radiators. Pulleys, valve covers, and air cleaner came from Southern Rods.