Newsletter
Sign Up today for our FREE Newsletter and get the latest articles and news delivered right to your inbox.
Home » 1962 Chevrolet Impala SS – Right Hand Man 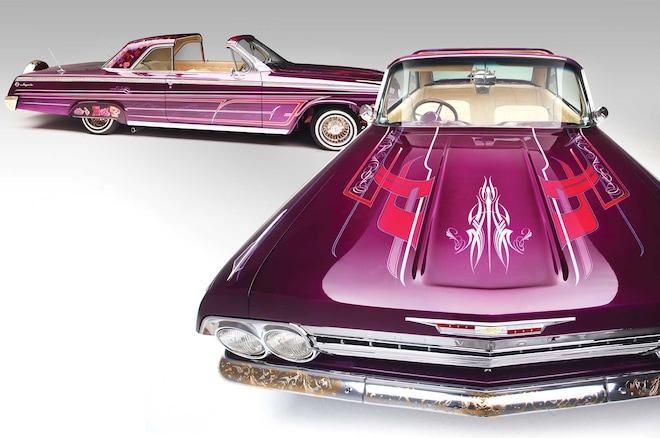 When competing in shows, everyone trips over their own feet to make their car stand out, especially when it comes to the sea of Impalas bound to show up. Thinking from the judges backwards and whatever your budgetary constraints are, you have to ask yourself what hasn’t been done before or if you can cleverly come up with a combination of things that hasn’t been done before. While some who have already looked at these photos may be wondering if we accidently transposed them, the answer is no. Robert Arreola set out to build a lowrider that’d shake things up and we feel he definitely accomplished what he set out to do.

Back in the early days, Robert’s ’66 Chrysler Imperial was definitely a departure from what shows up at events, but was never enough to place since it was his daily driver. When saving up for a Harley, a Latin World member in the LA chapter told him about a ’62 Impala in pieces he might be interested in. With little more to go on than a gutted and disassembled body with a wrapped frame, Robert and his friend David Escobar set out to build this SS into something that’d stand out from the crowd and do it all in David’s backyard.

Among the ideas that were tossed around were a Hollywood top, popular in the ’70s and a right-hand drive conversion. It was a difficult task to undertake, but Robert and David jumped in and quickly realized the domino effect of the conversion. The front suspension consists of a Buick Regal setup with the Impala A arms modified to accept the Buick ball joints. The hydraulic system has engraved, chromed, and polished Pesco 777 aircraft pumps mounted on Plexiglas for a floating effect, OG fat 8-inch front and 10-inch rear cylinders, two switches, four Accumax solenoids, and four batteries pushing the juice through hard lines. The stock rearend has been chromed and outfitted with ’84 Lincoln disc brakes.

A 350/350 engine and trans combo powers the car and has been beefed up with an Edelbrock 750 carb, chrome intake, chrome alternator, shaved firewall, and billet valve coves. Because the steering had to be moved, a custom radiator was built by Matt’s Radiator to make room for the ’80s Blazer gearbox and ididit column. The booster and master cylinder were moved under the dash, which was a job in itself to get the brakes dialed in and keep those cross-laced Zeniths coming to a stop.

Inside is where things look a little, well, backwards. The dash is a ’59/’60 unit that had the center section cut out, flipped the ends, and molded back together by Amy’s Body Shop. The glovebox and ashtray were taken out and it was fitted with Dakota Digital gauges and a pushbutton Retro-Tek shifter for the trans. A custom center console is straddled by stock seats covered in beige suede by Santos Upholstery in Bakersfield, California. A Pioneer head unit powers Rockford Fosgate speakers and Avionixx amps and was installed by Car Audio Pros.

Amy’s Body Shop sectioned the roof and painted the car in House of Kolor candy violet with a silver base and it was then adorned with muraling by Jose Hernandez, pinstriping by Al Morales and Mike Lamberson, and engraving by Carlos Salas.

With all the wild changes on this car, needless to say there were a lot of late nights doing things over again when unexpected problems arose. Special thanks in getting Rose Royce through those issues go to Robert’s wife Natalie, his children, David Escobar, and Robert Moreno for helping him out. And yes, Robert is still getting use to this setup and occasionally gets in on the wrong side.

Body/Paint
Amy’s Body Shop in Bakersfield sectioned off the top to make a Hollywood top before shooting it with a House of Kolor candy violent. Jose Hernandez added the murals while Carlos Salas added the gold and chrome engraving. Al Morales and Mike Lamberson are credited for the striping.

The Impala’s third generation in 1962 saw significant changes. Two new engines appeared with the 283 being punched and prodded into the 327 and the 348 into the famous 409, which were only available with a manual transmission. The Turboglide trans was discontinued and the venerable two-speed Powerglide remained the only automatic transmission until 1965. Some features the Impala boasted were full-length upper bodyside molding with a contrasting color insert, a ribbed body sill molding, stainless steel window reveal trim, Impala script on the rear fenders, and C pillar styling and wrap-around rear window on sedans. A mere $156 at the time would’ve upgraded your SS option to a convertible – highly sought by collectors. Even the hardtops with their “convertible style” roof on coupes are popular with collectors and helped bump production numbers over the 700,000 mark for the Impala that year.