Newsletter
Sign Up today for our FREE Newsletter and get the latest articles and news delivered right to your inbox.
Home » 1961 Chevrolet Impala – Precious Metals 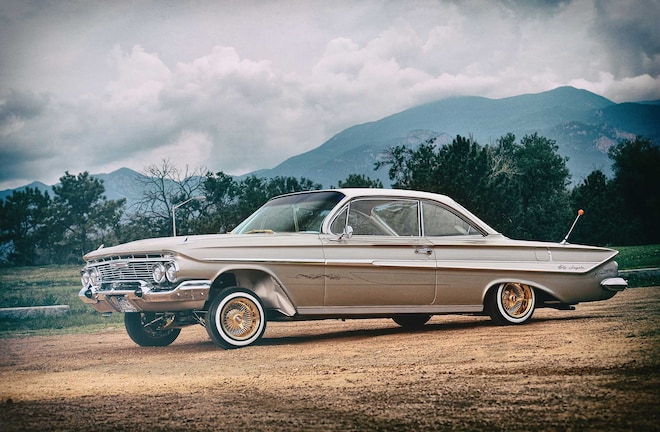 To say that 22-year-old James DeHerrera of Colorado Springs, Colorado, is a natural in the game is an understatement. He’s young, but the amount of experience he has is astounding. When he was 8 years old, James’ father owned a few lowriders. “I remember sitting at the kitchen table with my dad and he was looking through magazines with the name LOWRIDER on it,” James tells us. “I didn’t know what they were at the time, but I soon found out.

His father was browsing the magazine for new and creative things to add to his classic lowrider. At that moment, James became a true enthusiast and he was never the same. After first building a ’64 Impala and then later selling it, James was on the lookout for an older body style. He found a 1961 Chevy Impala for sale in Texas, laid down the asking price, and brought the Chevy back home to Colorado. To bring the Impala straight into true lowrider status, James added a set of wire wheels.

To match the already perfect paint, James brought the car to Bill Crider’s Auto Repair shop and they put the Impala on the rotisserie to ensure the entire undercarriage carried the same gold standard as the outside. His friend Chuckie came in and laid down some gold leafing and pinstriping to make it stand out even more.

James wanted to thank his sisters Emily and Estrella as well as his father James Sr. James’ father also has a custom ’63 Chevy Impala SS and on weekends they make time to cruise together. With friends like Chuckie, Bill Crider, and all the local car clubs in Colorado, it makes sense that Pot of Gold isn’t the only thing high in the Rocky Mountains.