Newsletter
Sign Up today for our FREE Newsletter and get the latest articles and news delivered right to your inbox.
Home » 1955 Chevy Bel Air Convertible – American Classic in Japan 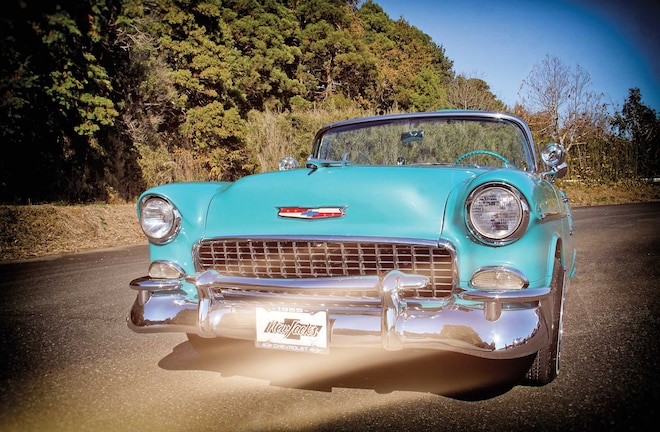 During our trip to Japan, we got a chance to shoot this timeless 1955 Chevy Bel Air convertible thanks to our friend Noriyuki Nakoshi of New Jacks. This American classic is a milestone in automotive history. The introduction of the first Tri-Fives helped GM brake sales record with its fresh new styling.

This ’55 owned by Mituhisa Ishii of Ibaraki, Japan, captures American history perfectly with its turquoise paint (a favorite among Tri-Five owners). The white and turquoise two-tone interior complements the look of the car. To enhance the original look, Mituhisa added duel spotlights to the outside. A compass and Guide traffic light viewer were added to the dash and power windows.

Under the dash are four switches that control the two old-school pumps in the trunk. The hydraulics are controlled by four batteries. The minimal amount of batteries are enough to lift and lower the car without weighing it down and letting the 13-inch 100-spoke wires get more pavement time.

It wasn’t until Mituhisa had the Bel Air in excellent condition that he was able to add the final accessory with his club plaque. Sixty years after its introduction, the ’55 Bel Air is still a head turner and this one is doing it overseas.

Chevrolet knocked one out of the park when they introduced the completely restyled Bel Air in 1955. The sleek, Ferrari-inspired grille, flat horizontal planes on the fenders, and dip in the beltline not only made it look fast, but Chevrolets went fast as well with the introduction of their first overhead valve small-block V-8. Buyers could opt for the 235 inline-six or the new 265ci V-8, available with a two- or four-barrel carburetor, the latter of which was offered as the “Power Pack” version on Bel Airs with dual exhaust and rated at 180 hp. A convertible Bel Air would’ve run you about $2,206 in 1955, but with only 41,292 made, you are really sitting on an automotive icon if you’re lucky enough to have one today.