Newsletter
Sign Up today for our FREE Newsletter and get the latest articles and news delivered right to your inbox.
Home » 1949 Chevrolet Convertible – Post WWII Era Style 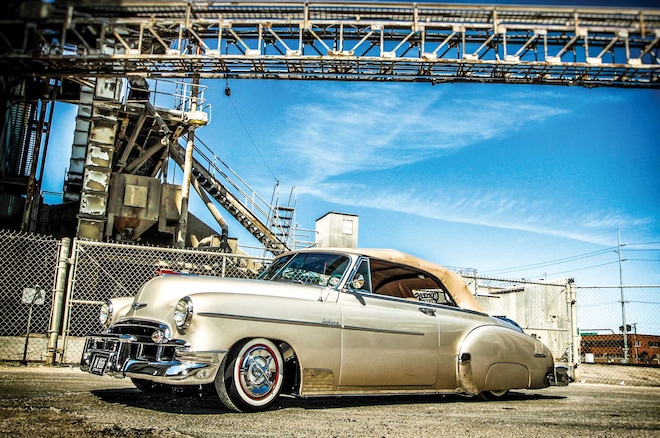 Way, way back in 1949, Chevrolet presented a whole new style of automobile after World War II. The latest design would have a lower, sleeker profile, with the lines of the front fenders smoothly blending into the doors to be countered by the rear fenders that continued to bow out of the sides of the car. Two-piece curved windshields not only improved better vision, but also added to the overall sleeker look.

There were 14 new models divided into the Fleetline and Styleline model series. The Fleetline had both two- and four-door fastbacks, while the Styleline was represented by notchback styles of sedans, coupes, station wagons, and the very nice-looking convertible. There were two types of trim levels added for the ’49 back then. There was the Special and then the nicer package called DeLuxe, which featured the very popular fender skirts.

Today these early “bomb”-style Chevrolets have become restoration projects of passion for old classic car builders like Jesse Sanchez who resides in the large lowrider city of Salt Lake, Utah. This showroom-looking piece of Americana art was once out in the fields rusting away as a parts car filled with bullet holes from target practice.

Jesse, like many of other car enthusiasts, had family responsibilities that often came first before he could take on the dedication it takes to drag a project car into his garage to begin a time consuming hobby. With the help of his son, he would build his own rotisserie for the frame and begin the sandblasting and the metal fabricating to patch up the rusted areas of the body.

Jesse is a proud member of the Compas Car Club, but he is also very proud to say that he built this post-war classic with his own bare hands. He says that when you take on a project build this challenging, that you have to visualize what the end result will be and that will always keep you focused, along with the support of a great family too!

Chevy revamped their Deluxe line in 1949 with an array of changes. It’d marked the first complete redesign since the end of World War II, and part of its popularity is credited to the fact that it mimicked many styling cues from higher-end GM cars, such as the Oldsmobile, Buick, Cadillac, and Pontiac. The notchback models were now called the Styleline series, while the fastbacks were known as Fleetlines. Both were available in the “Special” or upgraded “DeLuxe” trim levels. The improvements Chevy touted were widened doors, rear passengers seated ahead of (rather than on top of) the rear axle for more comfort, push-button door handles, hydraulic brakes, and knee-action shocks. Wheelbase was now 115 inches, with a slightly smaller 11-inch brake diameter. A Styleline DeLuxe convertible like this one would have weighed around 3,375 pounds, had a price tag of about $1,857, and was one of 32,392 that were produced that year. The 216 inline-six was the only engine for passenger cars and came with a three-speed manual transmission.