Newsletter
Sign Up today for our FREE Newsletter and get the latest articles and news delivered right to your inbox.
Home » 1985 Chevrolet El Camino – The Elco-Holic 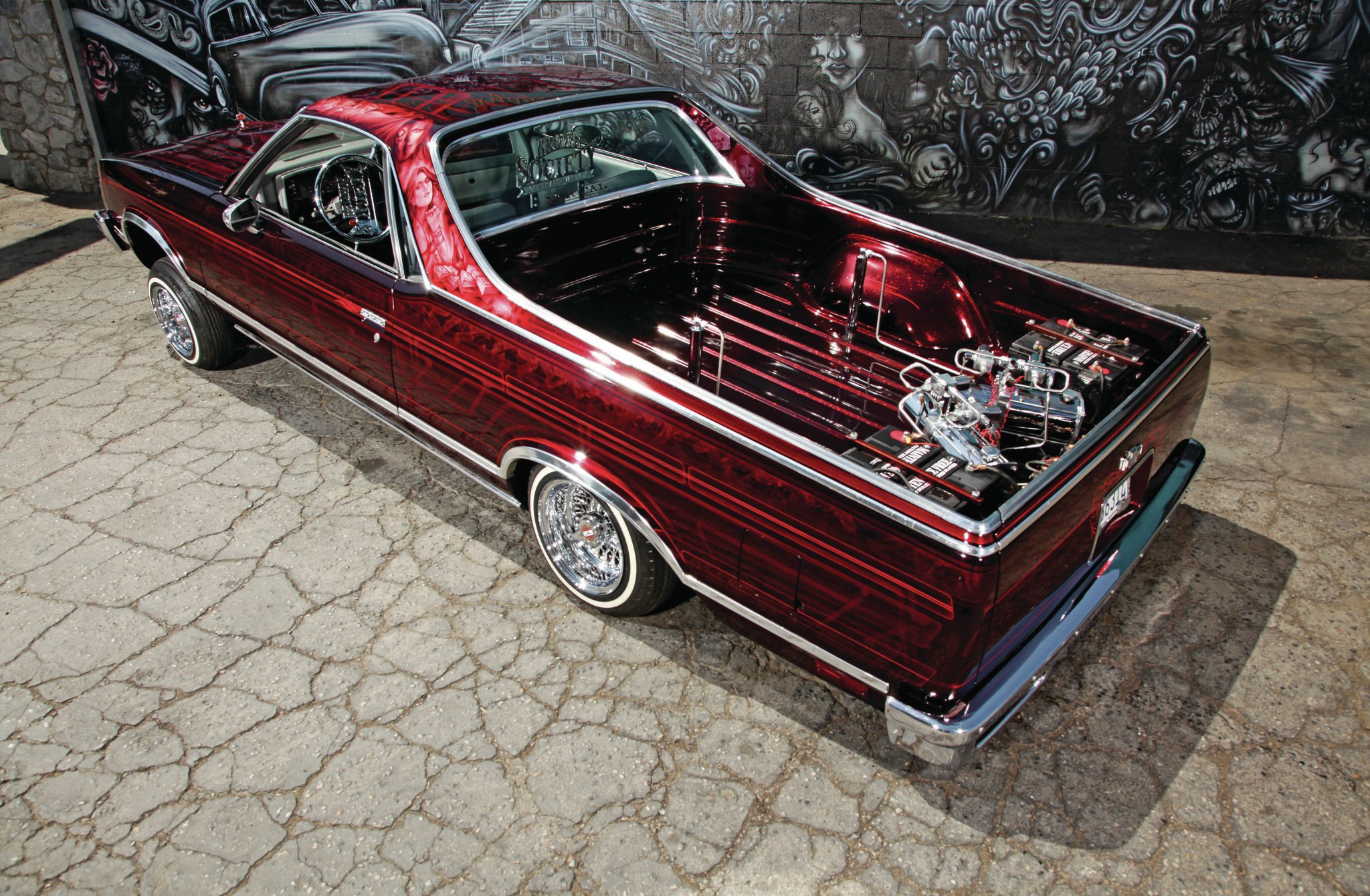 There’s a long-standing debate that may always go unresolved about whether El Caminos are cars or trucks. One thing is certain though, those who buy these “cars” are die-hard fans and there affection for what they have is pretty obvious. Like a lot of projects we hear about, Anthony DeLeon bought this ’85 El Camino off the original owner with the intention of just making some quick modifications for it to be a daily driver. Then the inevitable happened — the domino effect. Once you fix one thing, you get a bit obsessed with finishing it off. Like an “addict,” too much is never enough.

It seems only befitting that Anthony name the car “Elco-holic.” “You don’t see many lowrider El Caminos out there and I wanted to have one of the nicest ones,” he says. Initially Anthony brought the original car over to Renee at Renee’s Customs in Lindsay, California, to update the two-tone paint scheme to something reminiscent of the ’70s/’80s lowrider look by just having the roof done. After he saw the roof, he couldn’t very well leave the rest of the car alone and decided it was time to go full-on custom, paint and all. The House of Kolor Brandywine was graced with Muraling by Alberto Herrera at Quality Art in Visalia, California, and pinstriping by Chava at Chava’s Pinstriping in Woodlake, California.

The stock drivetrain was retained since it had low original miles and dressed up with some chrome components to show it off a bit. The hydraulics consist of two Black Magic pumps, four square dumps, six solenoids, eight switches, with 8-inch cylinders in front and 10-inchers in the back. Four Trojan 31-series batteries keep all the juice pumping through stainless tubing done by Jay at SNK Auto Body. Since the car was shot, it’s also received a chromed frontend, boxed and extended A arms, chrome sway bar, and chrome rearend from Krazy Kutting.

Interior appointments consist of two ’90s Honda Civic buckets straddling a custom console. The dashpad is also custom and given a douse of muraling along with the doorjambs. The rearview mirrors, door handles, and a custom steering wheel by Krazy Kutting emblazoned with Anthony’s club name was also created. A Pioneer head unit along with two MTX amps power two TV screens, four 12-inch speakers, a pair of 4x10s in the door, 5x7s in the rear, with tweeters and two component sets in the console. The work was done by Gabino from Santos Auto Stereo in Visalia, California.

As with most projects, the Elco-holic is far from done. Anthony still plans on adding more chrome to the undercarriage along with painting the belly, murals on the gas tank, fiberglass boxes for the battery covers, a molded underhood for muraling, and more detail work in general. You hear people say that their car is never, done but we feel this one is perfect case in point.

Anthony wants to throw out a thanks to Brown Society Car Club, Gabino, Steve and Jay from SNK Auto Body, and to his wife for facilitating (or putting up with) his addiction. It’s one form of dependence we surely endorse.