Newsletter
Sign Up today for our FREE Newsletter and get the latest articles and news delivered right to your inbox.
Home » 2008 Chevrolet Tahoe – Tuck and Roll 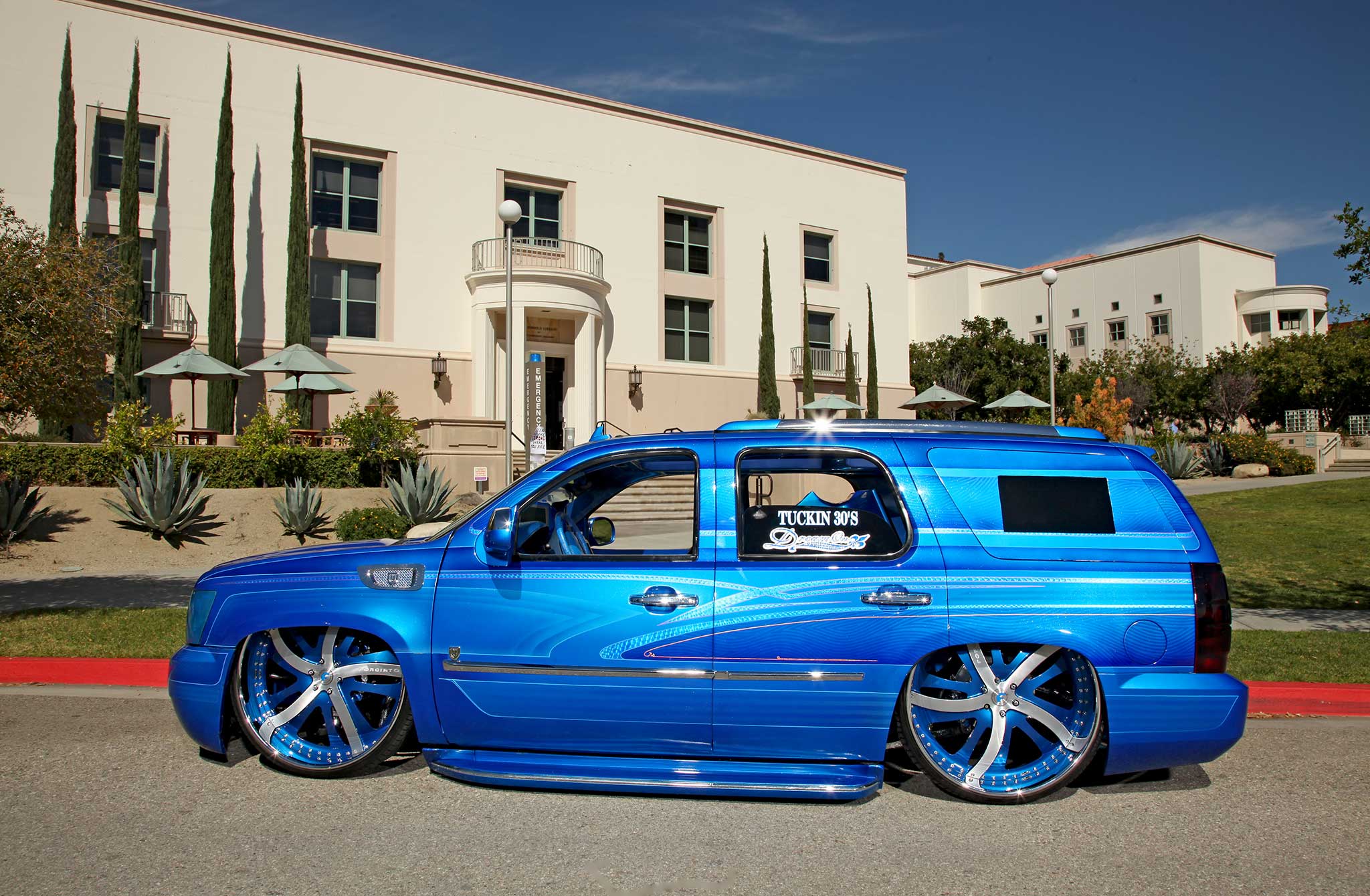 In early 2012 I was assigned to search and shoot cars for a new section in Lowrider Magazine that would feature late-model vehicles with 20-inch or bigger wheels. That section would be called Roll Players. The vehicles in this section would have to represent lowrider-style builds by having candy paint, a custom interior, and a modified suspension, but be incorporated into unconventional vehicles.

At that time there were two SUVs that were styled that way. The first was a green 1998 two-door Tahoe owned by Hector “Zacatecas” Esquivel. When I was finally able to contact his fellow club members, they informed me the Tahoe was being revamped for the upcoming show season. When it finally came out to the show scene, it was called La Reina and it won Lowrider Truck of the Year three consecutive times. The other SUV was a blue 2008 Tahoe owned by Rafael Ramirez aka Lefty.

The birth of Tuckin’ 28’s started with a visit to Speed Tech Auto Body in Santa Ana, California, were they sprayed House of Kolor Oriental Blue with blue ice pearl flake on the Tahoe. From there it went to Baldwin Park, California, where Danny D., added a variety of patterns that incorporated fingerprint and water-drop effects. Lavender and baby blue striping was added to highlight the candy blue silver leafing found on the sides and hood, and a touch of gold leafing throughout finished off the paint scheme.

J&B gutted the interior by eliminating the rear seat to make room for a one-of-a-kind fiberglass enclosure to house the massive audio system. The enclosure extended from the dash to the rear door and housed multiple TVs, three-subwoofers and two-amplifiers. Chuy’s Auto Electric had to install two 300-amp chrome alternators and four Kinetik batteries in order to power everything.

In order to earn the name “Tuckin’ 28’s” Lefty had to make sure his truck could live up to the name. He sought the services of Adam and Andy of Master Image Customs in Chino, California, to make sure he would be able to lay low. The duo began by customizing the upper and lower A-arms, notching the firewall, rolling the inner fenders in the front, and putting in a six-link rear. An airbag suspension made sure the Tahoe would be able to lay out. A powdercoated frame and fully chromed and engraved undercarriage finish off the belly of this beast. The truck has been recently been renamed Tuckin’ 30’s after receiving a new set of 30-inch Forgiatos.

Body/Paint: House of Kolor oriental blue and blue ice pearl flake. Danny D., added the patterns, striping, and leafing while Shin Heavens finished off the paint by adding a mural on the hood.